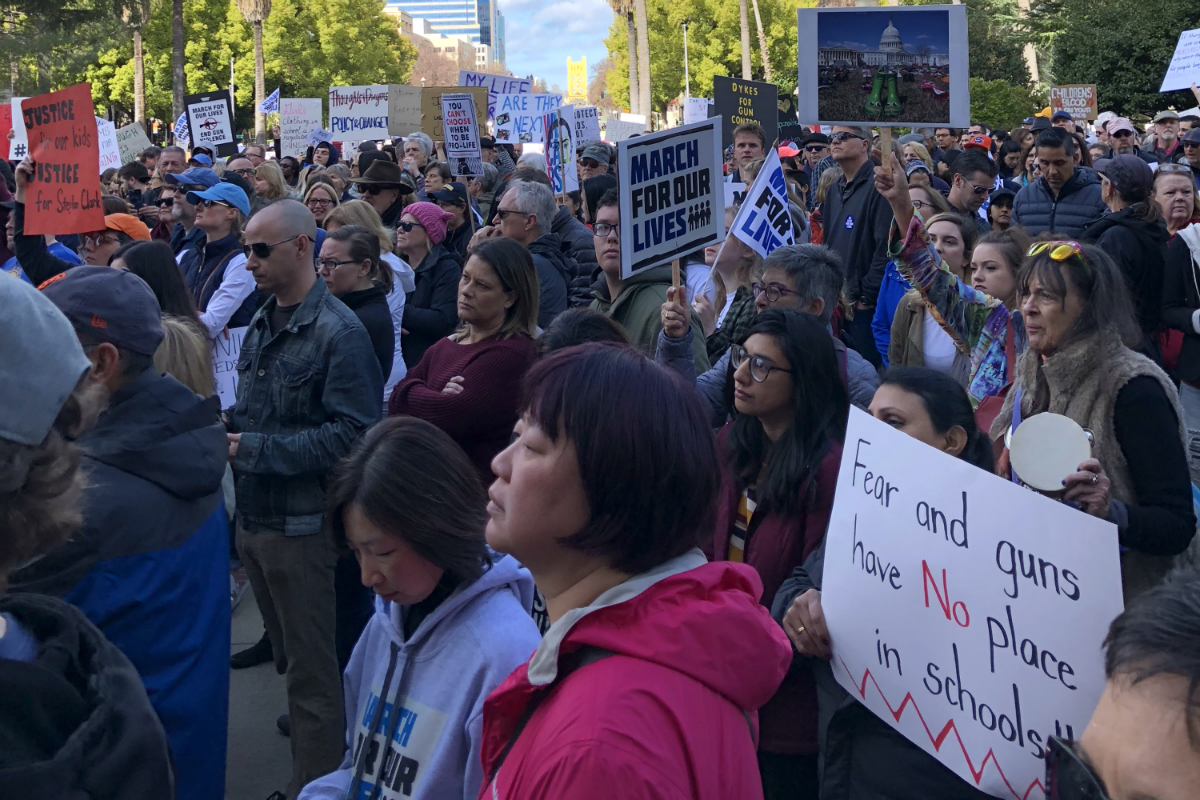 More than a million people worldwide demonstrated on behalf of gun control policies on March 24, in one of the biggest youth protests in the United States since the Vietnam War. The national and global demonstrations — countered by pro-gun rallies in several cities — were spearheaded by students from Marjory Stoneman Douglas High School in Florida where 17 students and staff were slain in a shooting in February. In California, students statewide joined the “March for Our Lives” protests to advocate for stricter gun laws.

In San Diego, roughly 5,000 people attended a march where organizers read the names of the 17 Stoneman Douglas High victims. In the weeks since the Stoneman Douglas shooting, San Diego County has been one of the many areas across the nation that has experienced a rise in school violence threats.

In the Los Angeles area, students and others also took to the streets to make their voices heard while staff at school sites ramped up security measures. The Los Angeles Times reported about the March 24 events: “Thousands marched in liberal Los Angeles, closing off the downtown core for hours. More than 120 marched in Victorville, in a high-desert region more associated with conservative values. About 5,000 gathered in a park in Santa Ana. In each place, marchers demanded that lawmakers end the easy access to rapid-fire guns and take action against the everyday violence that plagues urban communities.”

Students in the Central Valley held several rallies as well. According to the Fresno Bee, “more than 2,000 people gathered Saturday at Fresno High School to condemn America’s ‘gun culture’ … At the forefront of the protests — young high school students.” Similar protests took place in communities stretching from Stockton to Bakersfield. In Sacramento, thousands of protestors gathered at the State Capitol, holding handmade signs, leading call-and-response chants and registering people to vote before the upcoming election.

Meanwhile, Bay Area demonstrators called for bans of semiautomatic guns and for other actions such as universal background checks. At the San Francisco Civic Center, gun control advocate Sen. Dianne Feinstein addressed the crowd and also tweeted: “I’ve been fighting to get weapons of war off our streets and out of our schools since I was first elected. Never have I seen this passion, this energy, this determination to get #GunReform passed and make our communities safe again!”

Rallies also took place at the top end of California, from Arcata to Redding, where the nearby community of Rancho Tehama experienced a school shooting in November. Less prominently, other demonstrations also pushed back against stricter gun control.

All of these gatherings took place against the backdrop of 193 K-12 schools nationwide that have experienced school shootings since 1999. There have been 11 campus shootings in 2018 so far. Similarly, a 2017 report found that in the United States shootings are a leading cause of death among children aged 1-17.

One new poll conducted by Newsela found that 67 percent of high schoolers are in favor of stronger gun laws such as supporting the ban of bump stocks, while disagreeing that teachers should be armed.

In California, legislators have also been working on new legislation regarding school safety.  Assembly Bill 1747 would require schools to consult first responders when developing or updating school safety plans. AB 2067 would require school districts to place at least one armed school resource officer in every school. AB 3205 would require locks that allow doors to classrooms to be locked from the inside at schools seeking state funds for modernization. A fourth bill, AB 2497, would use a tax on guns and ammunition to help fund the placement of police officers on high school campuses and the hiring of school counselors at middle and high schools. (California public school counselors have among the highest caseloads of students nationally.) The California School Boards Association has taken an oppose position on AB 2067, as it is an unfunded mandate to have an armed school resource officer at every school, and is a decision better made at the local level to address specific district needs. CSBA does support AB 1747 on the expansion of school safety plans to include preparation for active shooter incidents. The other bills are still being analyzed by CSBA legislative advocates and have yet to come before the Legislative Committee.

Looking ahead, as student activists hope to build a “movement” and not a “moment,” there is a National School Walkout scheduled for April 20 — the anniversary of a 1999 school shooting at Columbine High School in Colorado that killed 12 students and one teacher, and left 24 injured.

CSBA has developed several resources to guide school leaders in establishing school security best practices and practices and in sustaining a positive school culture. Resources include policies, legal guides, crisis communication material and fact sheets. Click here for school safety resources and other information for board members and school leaders.