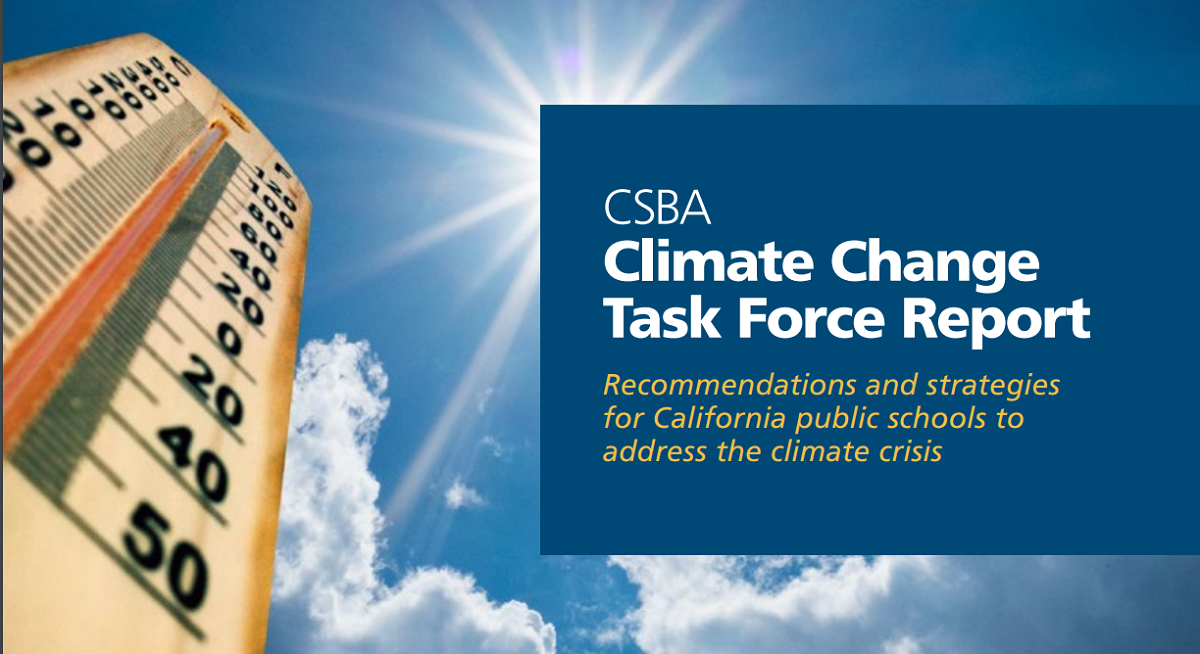 Social-emotional trauma and disruptions to their educational experiences due to extreme weather events such as wildfires, floods and drought have hindered the academic achievement of a multitude of K-12 students in California over the last few years.

Beyond that, the physical damages to facilities suffered by school districts and county offices of education have also resulted in economic hardships and social-emotional repercussions in the communities they serve.

These are among the reasons why CSBA’s Climate Change Task Force recommends local educational agencies and K-12 leaders must be involved in conversations with policymakers on climate change and adaptation.

“I am excited for the release of the CSBA Climate Change Task Force Report because it outlines impacts to school districts as a result of climate change; resources available to support school districts as they combat climate change and become more climate resilient; ideas on how to support students who care deeply about climate change and want to take action; and programs available to help prepare students for college and career in this changing world,” said Alisa MacAvoy, a member of the Climate Change Task Force, Redwood City School District trustee and CSBA Region 5 Director.

In addition to examples from LEAs throughout California on initiatives like creating more sustainable campuses and preparing students for potential futures in the green industry, the report looks at ways that education leaders position themselves in broader climate-related conversations through partnerships with nonprofits and businesses as well as with agencies at the local, state and federal levels.

“I believe the report is a valuable tool for wherever a school district is in the process of working on climate impact issues. There are those districts like the Petaluma City School District in Sonoma County who have already prepared their own climate change action plans and there are many districts and county offices that have yet to have the conversation about how they are going to respond to climate change,” said Gina Cuclis, a task force member, California County Boards of Education President-elect and Sonoma County Board of Education trustee. “This report can provide them with the tools to start the conversation and planning. I believe for those who are already taking steps to address how climate change is impacting their school community, this report can provide additional guidance and tools.”

The task force was formed in 2019 with a goal of figuring out ways CSBA can help LEAs address the impacts of climate change on schools. The group met virtually in 2020 and 2021 to produce the findings included in the report in addition to a webpage (csba.org/climatechange) of resources, which includes a sample resolution, sample policies and regulations, recordings of CSBA events on the topic and information on CSBA business affiliates as well as possible funding and grant opportunities.

Perhaps one of the most pressing reasons LEAs should pursue action around climate issues is student interest. As covered in the report, a 2019 survey from the Kaiser Family Foundation, in partnership with The Washington Post, found that a sample of 13- to 17-year-olds considered climate change an important issue. Fifty-seven percent of the teens said climate changes leaves them feeling afraid. The majority of those surveyed also said the issue made them angry and motivated.

For now, young people have taken matters into their own hands, working to reduce their carbon footprints and engaging in political actions such as climate strike walkouts at schools 2019. Many also show interest in green jobs.

“Addressing climate change is important because our students are asking for it. This is very important to them as it’s their future at stake,” Cuclis said. “We need to listen to their calls for action.”

“California’s public schools have a critical role to play in meeting this demand and have an opportunity to emerge as leaders in the fight to address global climate change, while ushering in the next generation of innovators who will continue that fight,” the report states. “Put simply, public schools should have the opportunity to do what they do best: educate.”