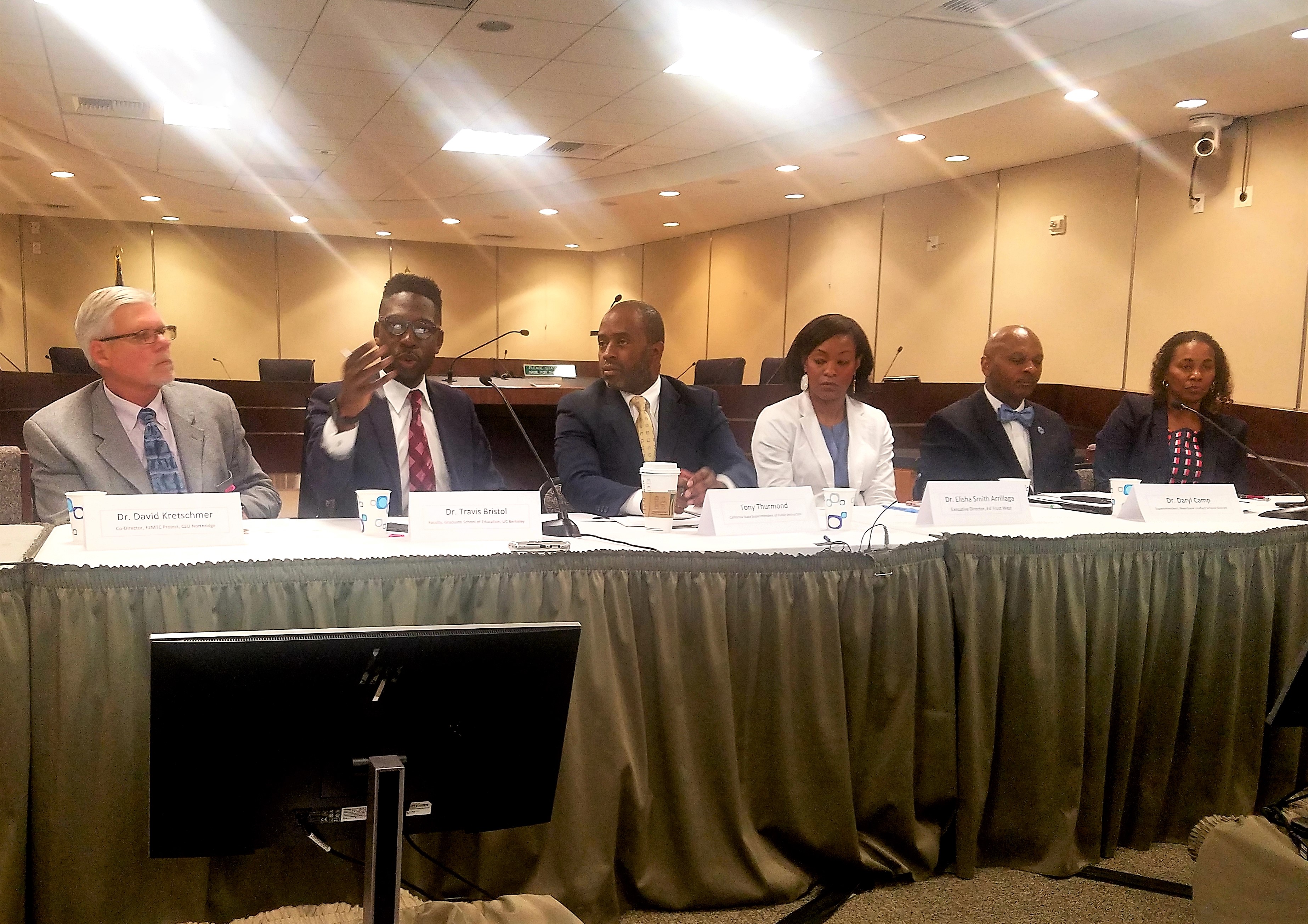 Emphasizing the benefits they say all students and teachers could gain from the state having more teachers of color, experts shared their strategies and insights on moving forward at a recent event hosted by State Superintendent of Public Instruction Tony Thurmond. The April 24 forum at the California Department of Education was the second in a series on closing the achievement gap.

“There’s research that has said that this will create a benefit for students,” Thurmond said of diversifying the teacher workforce. He cited studies showing particularly higher achievement for African American elementary school students who have African American teachers.

The statistics lay bare California’s disconnect between the race of its students and the race of its teachers. Elisha Smith Arrillaga, executive director of The Education Trust-West, said four out of five of the state’s K-12 students are of color, while only about one-third of teachers are of color. Further, she said larger gaps exist in the state’s largest 15 school districts.

Recognizing the data, panelists said gains will depend on political willpower and systemic, comprehensive solutions that focus not only on teacher recruitment but also on retention.

“We know what to do, it’s just a matter of do we have the will to get it done,” said Riverbank Unified School District Superintendent and CSBA Governance Consultant Daryl Camp. He said one simple way to change the narrative is to transform messaging in materials such as brochures and advertisements to better attract people of color to the teaching profession.

Despite touting itself as highly progressive, Smith Arrillaga said California has fallen behind states such as Mississippi in working to align its student and teacher populations. Thurmond acknowledged the state’s shortcomings and said the CDE is working to expand programs for teachers of color, particularly building a pipeline for men.

University of California, Berkeley Graduate School of Education assistant professor Travis Bristol said step one is for all agencies involved in public education is to self-evaluate and ensure policymakers are trained in areas such as implicit bias; if they are not, even the most well-intentioned policies may not deliver results. “That’s at the macro level, but we also need to have those conversations at a district level,” Camp said in response.

The panelists agreed that California has largely tried to address its lack of teachers of color in a piece-meal fashion, rather than focusing on a systemwide approach. Several programs at California State University institutions have made inroads but need more funding and support to scale to a higher level, officials said.

CSU Northridge is the lead campus on the Future Minority Male Teachers of California project, which provides scholarships and other resources to men of color interested in becoming teachers.

The program focuses on peer and mentor support in addition to recruitment, said CSUN associate professor of secondary education Monica Garcia. “We try to make sure at least one (training) assignment they have is with a male teacher, preferably with a male of color,” she said of participants.

At CSU’s Fullerton campus, dean of the College of Education Lisa Kirtman said momentum is growing around the Titan M.E.N. (Male Educators Network). The program, with 18 participants this year, recruits African American and Latino men who show an interest in teaching. “We’re still working on that, but it’s something that we take pride in and will continue to grow,” Kirtman said.

Elsewhere in the country, Berkeley’s Bristol cited the success of cutting-edge, publicly-funded programs in Massachusetts and New York City as examples of efforts that outpace California. The New York program, NYC Men Teach, is a $16 million push to attract 1,000 men of color to become teachers.

Bristol said it is also important for programs to elevate and train mentors, so there is a strong structure in place when teachers of color begin their careers. However, he also said a district or school’s environment is a key factor in retaining teachers. “Just having a mentor could not and did not trump working conditions,” he said of research findings.