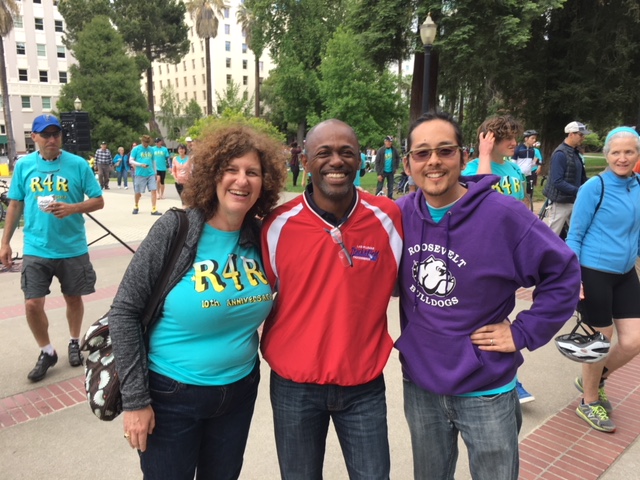 CSBA’s push to secure Full and Fair Funding for public schools is a statewide campaign, but its success depends on local support from every corner of California. On April 28, CSBA President Mike Walsh addressed the kind of community-driven event that is essential to raising awareness about the state’s underinvestment in public schools and mobilizing people to advocate for change. On the steps of the Capitol, Walsh made the case for Full and Fair Funding to more than 300 parents, students, teachers, school staff and education advocates who had biked up to 110 miles from Oakland to Sacramento.

The journey was part of the 10th installment of Ride 4 A Reason, an annual fundraiser for schools in Oakland USD that brings the community together “to advocate for greater funding for education and reform in the way that California funds its public schools.”

The event began in 2008 when a small group of parents biked from Oakland to Sacramento to illustrate their frustration with deep cuts to education funding and has grown steadily in succeeding years. Event organizers like Oakland USD Director and CSBA Delegate Jody London make the case for increased funding by connecting the dots between what happens in classrooms to the larger picture of state education policy, the state budget and their impact on public schools.

“The Ride 4 for a Reason is important for several reasons. First, it helps highlight the importance of Full and Fair Funding for California public schools,” London said. “Second, we raise funds for, as of this year, eight Oakland schools. The funds are divided equally between the schools. For some, this is their largest fundraiser. Third, the Ride 4 A Reason builds community. Fourth, we embrace the wellness values of Oakland Unified – we won a Golden Bell several years ago for our Wellness Champion program. And it’s fun!”

This year’s ride raised nearly $150,000 for Oakland schools, but the ultimate goal is focused on a more ambitious statewide reform of school funding that make this kind of event obsolete. As the Ride 4 A reason website explains, “Many schools in California depend on community fundraising to provide elective classes and enrichment programs — things that used to be thought of as necessary like libraries, art and music, science equipment, sports programs, and low-cost after-school activities. But community fundraising alone can’t do the really thorough work needed to fully staff and support all schools, especially in big, urban districts. California teacher salaries remain uncompetitive, and our state’s spending per pupil remains well below the national average. We can’t car-wash and bake-sale our way out of big, structural problems like that.”

That was a point Walsh highlighted with a litany of statistics detailing California’s woeful lack of commitment to public schools: 41st in per-pupil funding, 45th in taxable income spent on education and last or nearly last on every measure of school staffing. Those rankings shocked many in the crowd, but only served to increase their determination to fight for Full and Fair Funding of public schools.

To learn more about Full and Fair Funding and to obtain the CSBA resolution calling on the Legislature to raise per-pupil funding for California schools to the national average by 2020 and to the average of the top 10 states by 2025, click here.