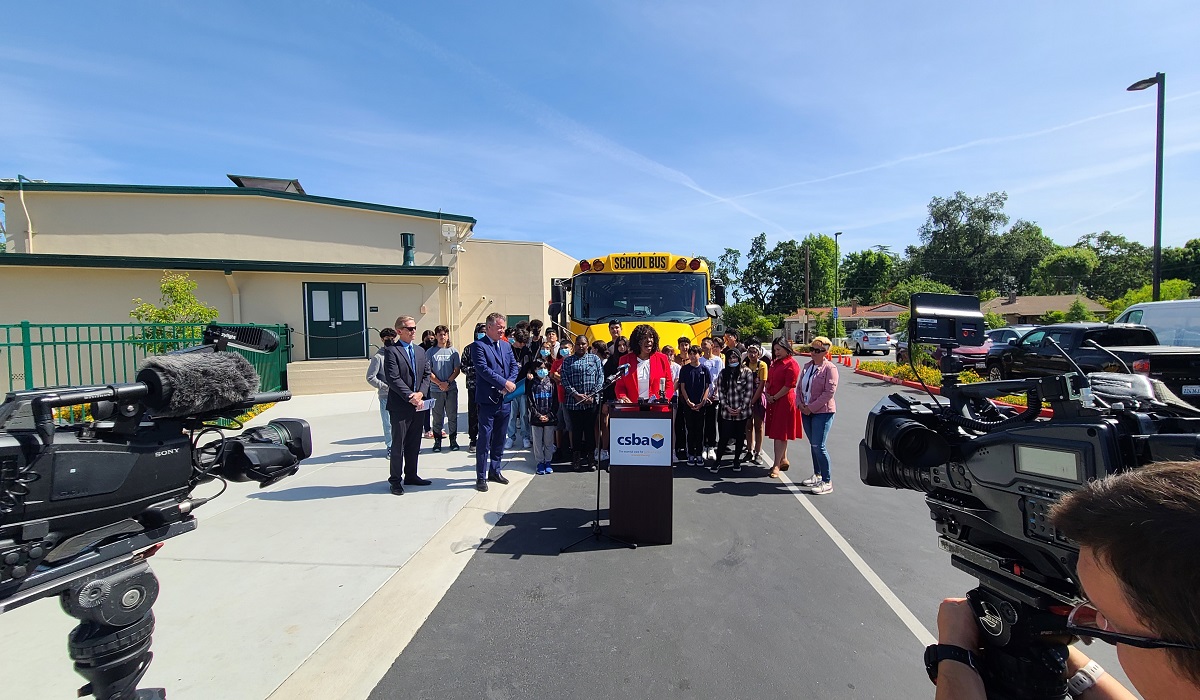 In politics and in life, it’s especially gratifying when you achieve an ambitious goal, overcoming challenges and skepticism along the way. That was the path CSBA took en route to key victories for public schools during this year’s budget negotiations. When Gov. Gavin Newsom signed education budget trailer bills Assembly Bill 181 and AB 182 into law on June 30, he codified several provisions that reflected CSBA’s priorities and will deliver billions of dollars annually to California schools and the students they serve.

The home-to-school transportation package is a massive win for California’s students and families, and one of CSBA’s most hard-fought victories. In retrospect, it may seem like an easy and obvious campaign, given that school busing boosts attendance, increases access to instruction and services, reduces traffic and pollution, lessens the commute burden for parents, and provides a safer means of transport for students. The reality, however, was just the opposite.

Most observers said that any deal to improve home-to-school transportation was unrealistic. Many scoffed at the idea and said that CSBA was wasting its time. Yet, CSBA, working alongside our stalwart partners at the Association of California School Administrators (ACSA), invested significant energy and resources in support of AB 2933, the CSBA-sponsored home-to-school transportation legislation authored by Assemblymember Patrick O’Donnell (D-Long Beach).

First, detractors said it would never happen, then they said it would never make it out of the appropriations committee, then they said the Senate would never consider the bill’s provisions when there was a competing Senate bill on the same issue — one that included a shortsighted mandate that CSBA fought tooth-and-nail and defeated. What the critics didn’t consider is that AB 2933 would shape the conversation on the broader home-to-school transportation issue and provide serious leverage CSBA could use to secure amendments on the Senate’s less favorable transportation bill. That strategy paid serious dividends and resulted in the successful budget provisions that brought our members an unprecedented increase in funding for school busing. At each step in the legislative process, CSBA won outright or gained significant changes on the major home-to-school transportation issues. And it was a long time coming.

Those who have been with us for a while will know that CSBA has carried the banner for increased school funding for a number of years. On multiple occasions, the Legislature passed CSBA-sponsored bills containing a COLA for home-to-school transportation, only to see it vetoed by then-Gov. Jerry Brown. That was discouraging, but we didn’t let those setbacks deter us. In fact, we returned this session with an even stronger bill designed to end California’s worst-in-the-nation status for home-to-school transportation.

Sadly, only nine percent of California students take the bus to school, the lowest figure of any state. That’s largely the result of woeful state funding that has remained at 1981 levels for more than four decades, despite substantial increases in transportation costs and the general cost of living during that period. Stagnant funding caused many districts to scale back school busing over the years, not because it wasn’t important, but because inadequate overall revenue for schools forced them into difficult choices and they directed resources elsewhere to support student need. That trend only accelerated during the Great Recession when many districts abandoned their transportation programs entirely.

Now, thanks to a Herculean effort from CSBA, California is positioned to reverse four decades of failure at the state level when it come to funding home-to-school transportation, and millions of additional California students will have the chance to ride a bus to school.