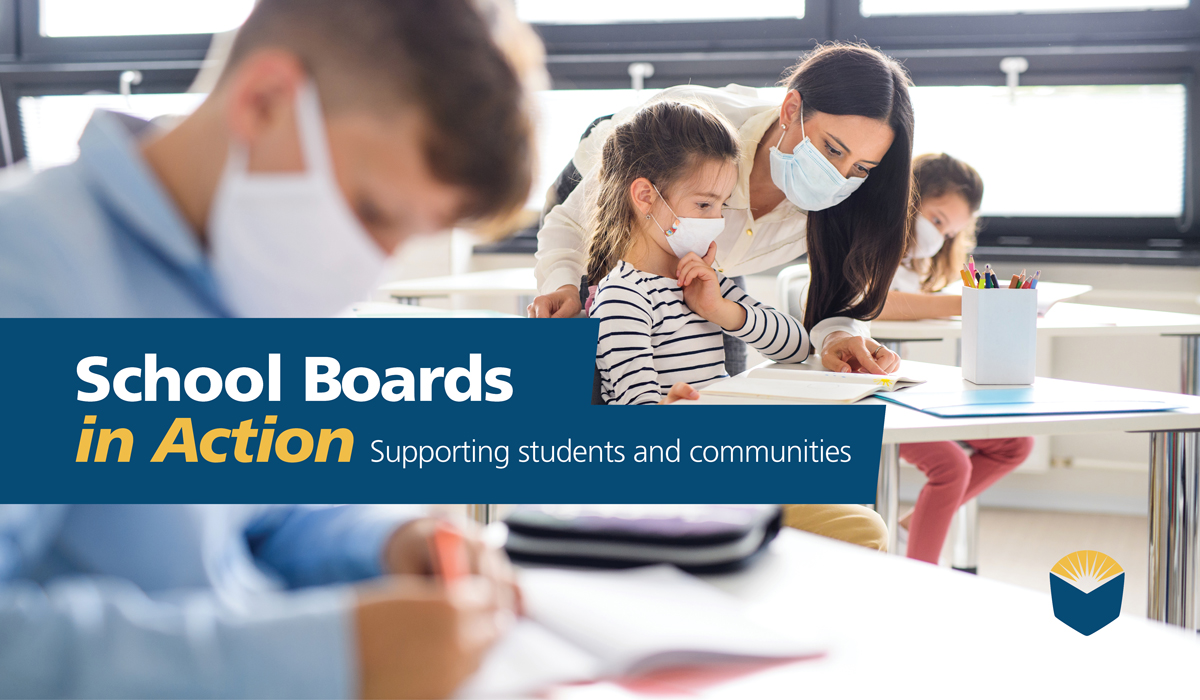 Adam Escoto is featured as the member profile in the fall issue of California Schools magazine, which featured an excerpt from his interview. The full interview is presented below.

How long have you been a board member and what inspired you to run?

On January 23, 2019, the Morgan Hill Unified School District Board appointed me to fill the Trustee Area vacancy representing District 7. Two years later I ran for the seat unopposed.

My inspiration to run for the Trustee seat was the same inspiration that motivated me to seek the January 2019 appointment. Trustee Area 7 mirrored my life experiences with its high concentration of children on free and reduced-price lunch and its large population of Latino children and families. As a former K-12 site administrator and assistant superintendent, I believed I brought a unique perspective that would complement the school district’s governance body, a perspective that has enabled me to effectively reach out to, and collaborate with, a broad spectrum of individuals and groups in our community.

How have your past experiences shaped the way you view California’s educational system?

“Education is the most powerful weapon, which you can use to change the world.”

As a student I used education to change my life. I am a product of the state’s Foster Care System. I was placed in many foster homes, too many to keep count, from the age of 10 until I aged out at 18. In the early years of foster care, I struggled in school both academically and socially. I was involved in gang activities and felt completely disengaged from the three middle schools and seven high schools that I attended.

While in high school, I learned about the importance of school and community partnerships. In spring of 1964, a local community nonprofit organization reached out to all the high schools  in the city. The organization was recruiting Latino students for a youth leadership program. I was encouraged by the high school staff to participate in this program, and I did. This unique partnership was the foundation for recognizing and honoring my racial and cultural identity. Then and now I believe these partnerships should be the norm in supporting students. Early in my career as a site administrator I recognized that schools partnering with community-based organizations was an effective way of engaging the whole community to strengthen student and family resiliency.

In the late 1980s, I joined San Jose Unified School District’s Federal Court Order Desegregation Team. I was responsible for developing the school district’s plan for informing and engaging parents on all aspects of the school district’s desegregation efforts. My plan was based on the belief that parents are essential partners in addressing the educational and social-emotional needs of our students.

In the early ‘90s I completed my graduate work and earned my Administrative and Counseling Credentials. I requested and was granted an appointment as an assistant principal at a middle school. After two years, I was appointed principal at a downtown school. The site was in a gang-infested neighborhood. The student body was 80 percent Latino, 60 percent English learners and 15 percent homeless youth. The school site was surrounded by drug rehab houses, and two domestic violence centers and 35 registered sex offenders resided within a two-square-block radius of the school site.

Despite these circumstances, the school was the first school to exit Program Improvement status and exceeded the atate’s API goals for six consecutive years. During those years, my team and I partnered with a number of community organizations to enhance our efforts to close the academic achievement gap.

For example, I read an article that the game of chess could improve critical analytical skills. At that time our students were struggling with math proficiency, so, our school site partnered with an organization that brought in their volunteers to teach the game to our students and staff. With time, our K-5 students learned to play chess. Grade-level chess clubs were formed and shortly thereafter the chess organization’s leadership encouraged us to form a school team and compete against a private school across town. We played them three times and won each time. Months later I learned that a local private elementary school in our city had competed in a statewide chess tournament and won. I later learned that the state chess champion team was the same private school our students had defeated. The best part of this story is when our students received their Standardized Math test results, we had a 20-30 point Math Proficiency gain.

Who was the one adult you looked up to growing up and why?

One day during my sophomore year of high school I was introduced to Mr. Sanchez. He was my new social worker. He was tall, skinny, wore glasses and a suit and tie. He was my first and only Latino social worker. For a long while, I was not very trusting nor communicative with Mr. Sanchez. I gave him a lot of ‘yes’ and ‘no’ answers to his questions about my past in schools and on the streets. I recall I was also very rude and disrespectful to him.

With time, however, I realized that Mr. Sanchez would be the adult that I would look up to, admire and respect. He was my advocate, consultant and a broker of resources. Mr. Sanchez helped me understand and accept that not all of my “street-wise survival skills” were going to transition well in school settings and that a new set of skills were essential to my success in school and in navigating my life journey.

He did, however, recognize that I had a strong will to beat the odds and achieve a life different from the one from which I came (poverty, drugs, neglect and abuse). With Mr. Sanchez’s encouragement and support, I participated in high school sports, school clubs and student government. He also helped me get a job at the local Dairy Queen to earn some pocket money. My boss (who I privately referred to as the “Burger Lady”) was tough and stingingly direct. She always pushed me to work hard and efficiently. One semester I was failing two classes. I told her that I had to give up my job so I could study more and bring my grades up. I was taken aback when she said she wasn’t going to let me quit. Instead, she said she was going to adjust my work hours. The “Burger Lady” said she was going to pay me for two hours of work and pay me for two hours for studying. Even after my grades improved, she continued the work/study pay schedule during my junior and senior years of high school.

Two years later on the day of my high school graduation, I walked on stage to receive my high school diploma. After my school principal handed me my diploma and I began to walk off stage, I turned to the audience and spotted my foster parents, Marc and Sue, and sitting next to them was the “Burger Lady,” and sitting next to her was Mr. Sanchez. They were all crying and honestly, so was I. It was the first time I could recall having experienced tears of joy. Years later, Mr. Sanchez and I would share another joyful and significant moment.

In the spring of 1994, I was awarded a master’s degree. On the day of my graduation, I sat in anticipation of my name being called to come up to the stage to receive my degree. My wife, Laura, and daughter, Mia, sat several rows behind me. Sitting pensively, I thought about my life’s journey up to this day. I was thinking about all of my foster homes. I thought about what I had learned about myself and those that supported me along the way. At that moment I heard my name called. I walked up to the stage to receive my degree. Waiting at center stage to place my master’s degree hood over my head and on my shoulders was Mr. Sanchez, now Professor Dr. Sanchez.

As a recent Masters in Governance attendee, why did you feel it was important to take the courses?

The best way I can answer this question is to draw a comparison from my passion for horses. Horsemanship, generally speaking, is about attitudes and behaviors that support the rider’s understanding that the most important thing you can do with any horse is to establish a relationship with it. Horses are herd animals. They depend on the leadership from the herd for safety and comfort. A horseperson understands that a horse can and will determine very quickly if the rider is competent and confident enough to ensure the horse’s safety and comfort. To be a good horseman you have to commit to continuous learning.

I was delighted to discover that the governance consultants in CSBA’s Masters In Governance courses do the very same thing for trustees. They accelerate their learning and crystalize the skills needed to be an effective governing board member, whether they are new to the role or want to refine their governance skills. As a former educator, I had many interactions with trustees and frankly, I thought I understood what the trustee role was all about. Shortly after being appointed to the school board I discovered that governance was like horse riding. Just because you can climb up on a horse doesn’t mean you know how to ride it, let alone be its leader.

Like horsemanship, there was a lot to learn about governance. I began to read research-based studies, books on governance, had conversations with other trustees from other school districts in our county. I discovered that there was a richness in the conversations that were taking place not only in CSBA but also in the California Latino School Boards Association and the Asian Pacific Islander School Board Association.

MIG is what brought it all together. The MIG courses strengthened and expanded my level of competence and confidence to carry out my governance role and responsibilities.

What is one important thing that you have learned?

The most important thing that I have learned in MIG is the distinction between the terms and practices of “governance” and “good governance.” Governance describes a process of decision making and the process by which decisions are implemented or not. Good governance, on the other hand, adds elements of equity and social justice, stakeholder inclusion, strategic thinking, accountability and fairness. Many of these elements, I believe, are also those that support social learning and lead to resilient school communities.

What is one major concern you hope to address as a board member?

For years, students have been arriving on our campuses with circumstances that would overwhelm a healthy adult — let alone a school-age child. In collaboration with my board colleagues, we will continue to remind ourselves that although we cannot change these circumstances, we can change the circumstances by which we teach and support our students.

I will advocate for holding high expectations for all those who serve our students by having them recognize student’s assets and not their deficits. While we must keep students at the core of every board discussion, we must welcome their families as well, especially during these challenging times.

As previously mentioned, as a child growing up in foster care, I learned about the importance of a caring community. Schools must nurture strong community partnerships because we can not do it alone, nor should we. We must welcome community resources as a good governance best practice.