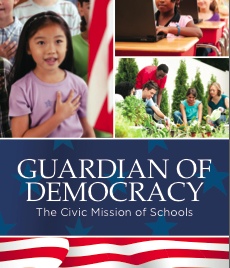 by Ted McConnell, Executive Director, Campaign for the Civic Mission of Schools

“Knowledge of our system of government, our rights and responsibilities as citizens, is not passed down through the gene pool, it must be taught to each generation and we have work to do!” This statement by Justice Sandra Day O’Connor articulates the historic and essential civic mission of our schools and the urgent need strengthen and improve civic learning for all students.

The need to educate all students—native-born and residents by choice—on the great power vested in ‘We the People’ was a principal reason for the establishment of our American system of education. Civic learning has historically been considered co-equal in importance with education for a useful trade or occupation and preparation for higher education.

While still saying that civic learning is vitally important, in recent decades well-intentioned policymakers have all too often established policies that have had the effect of marginalizing the social studies and civic learning for far too many students.

The consequences of a lack of attention paid to civic learning are shown in the results of the National Assessment of Educational Progress (NAEP) exams, where for over a decade scores in civics and history have remained flat, with only 25 percent of students attaining a ‘proficient’ level of understanding in these subjects, critical for the future of our republic.

In California and across the nation, research is revealing a very troubling ‘civic learning opportunity gap.’ Students attending schools that serve populations with higher socio-economic status have many more civic learning opportunities than students attending schools serving lower SES populations, minority populations and those serving high concentrations of recent arrivals to our nation. Schools facing pressure to make ‘annual yearly progress’ are all too often significantly reducing instructional time for civic learning/social studies, or in some cases eliminating the subject altogether to concentrate on math and reading.

This should concern all of us. The civic learning opportunity gap threatens to disenfranchise swaths of our population due to a lack of opportunity to acquire civic knowledge and skills.

Thankfully, with the active involvement of the California School Boards Association, California is taking action to restore the civic mission of its schools.

Chief Justice Tani Cantil-Sakauye and State Superintendent of Public Instruction Tom Torlakson have joined together to host a state summit to diagnose the problems confronting civic learning. As a result of the summit, the Chief Justice and Superintendent have established a powerful California Task Force on K-12 Civic Learning, co-chaired by Justice Judith McConnell (Fourth Appellate District Court of Appeal) and Sacramento County Superintendent David Gordon, empowered to examine all polices related to civic learning and to make recommendations for improvement. CSBA President Cindy Marks serves on the Task Force.

Each of these initiatives offers great promise in restoring the civic mission of California schools. What about your district, school board member? What will you do to ensure every student in every school in your district receives instruction to attain the civic knowledge and skills necessary to take their place as an informed and engaged citizen of our nation?