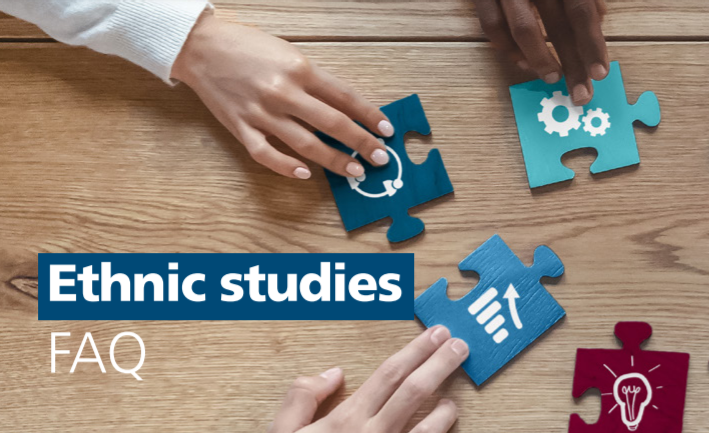 What is ethnic studies?

Ethnic studies examines the histories, experiences and cultures of various racial and ethnic groups and explores race and ethnicity in various social, cultural, historical, political and economic contexts. The preface of California’s Ethnic Studies Model Curriculum states that it will “focus on the traditional ethnic studies first established in California higher education which has been characterized by four foundational disciplines: African American, Chicana/o/x and Latina/o/x, Native American, and Asian American and Pacific Islander studies. The focus on the experiences of these four disciplines provides an opportunity for students to learn of the histories, cultures, struggles, and contributions to American society of these historically marginalized peoples which have often been untold in US history courses.

Ethnic studies is not a required course, nor is any school district or county office of education bound to implement the model curriculum. The model curriculum offers a menu of options from which schools can choose from or simply use as a reference in designing their own customized approach. There is pending legislation that, if passed and signed into law by the Governor, would phase-in an ethnic studies graduation requirement for the class of 2029–30, but that outcome has yet to be determined.

Why are we talking about ethnic studies?

On March 17, 2021, the State Board of Education adopted a model curriculum for ethnic studies, complying with a mandate from the California Legislature to approve a curriculum by April 1, 2021. The bill creating the mandate passed in both Assembly and Senate policy committees without a dissenting vote and was approved by both houses on bipartisan votes. The approval of the curriculum completed a lengthy process that took four years, encompassed four drafts, and three public vetting and comment periods that generated more than 100,000 public comments. As suggested by those numbers, interest in this topic is significant and the debate over how best to construct the model curriculum was intense.

The tension surrounding this issue was evident during public comment at the State Board of Education and caused SBE President Linda Darling-Hammond to say, “The passion that we hear about this topic illustrates why ethnic studies is so important. Much of it is a quest by each person or each group for a sense of belonging and acknowledgement. Ethnic studies demands that we understand the forces that stand in the way of our shared humanity so that we can address them. We need the more complete study of our history that ethnic studies provides and the attention to inequality that it stimulates.”

School districts and county offices of education are not required to implement the model ethnic studies curriculum adopted by the SBE. Yet, as ethnic studies has become intertwined with many of the larger social conversations around race, ethnicity, identity, culture, politics, law and history, the subject has received greater scrutiny. School boards meetings in particular have become a flash point for debates on ethnic studies and its role in public education.

What is the debate about ethnic studies?

Adoption of the model curriculum did not end the discourse on ethnic studies.
If anything, it intensified discussion at the local level. In local educational agencies around the state, parents, students, staff and community members are debating not only the specific composition of the ethnic studies curriculum, but also the general value of ethnic studies as a course. Some view ethnic studies as radical, divisive, anti-white or un-American, while others feel that elevating the experiences and contributions of underrepresented or marginalized groups teaches students essential lessons that can lead to better understanding.

The local debates taking place across California follow years of discussion at the state level about which ethnic groups should be included in the curriculum, the extent to which they should be included, and how their experiences should be presented when there are conflicting viewpoints. Divergent opinions have been expressed across the political spectrum on a range of issues, which resulted in multiple rewrites of the initial draft curriculum.

The version of the Ethnic Studies Model Curriculum that was approved this spring includes an exploration of anti-Semitism and lessons on the Arab, Armenian, Jewish and Sikh American communities that were absent from earlier iterations. It also removes some terminology that critics felt was inaccessible to many users. The changes satisfied some of the groups that were originally opposed to the model curriculum and alienated some of its supporters who felt they deprived the model curriculum of important critiques of American society. The debates over ethnic studies now continue at the local level as local governing boards make their own decisions about whether to adopt ethnic studies and what material to include.

Why do supporters advocate for ethnic studies?

What does the research say? Supporters maintain that ethnic studies improves student outcomes, critical thinking, self-esteem and student engagement while increasing connection between students of different backgrounds. One of the leading papers on ethnic studies, The Causal Effects of Cultural Relevance: Evidence from an Ethnic Studies Curriculum, indicates that participation in ethnic studies can reduce dropout rates and improve student achievement and that “culturally relevant teaching, when implemented in a supportive, high-fidelity context, can provide effective support to at-risk students.”

In 2014, Thomas Dee, a professor at Stanford’s Graduate School of Education and director of its Center for Education Policy Analysis, and Stanford post-doctoral fellow Emily Penner assessed the impact of ethnic studies programs in San Francisco USD. The pair evaluated 1,405 ninth-graders who were at risk of dropping out and had been assigned to an ethnic studies course. They compiled their findings in The Causal Effects of Cultural Relevance: Evidence from an Ethnic Studies Curriculum. The study showed that struggling students who took ethnic studies went on to record a C-plus average in their freshman year while similar students who didn’t take the course logged a D average. The ethnic studies students also completed four more semester-long courses than their peers and had nearly perfect attendance.

Researchers also discovered positive effects for male, female, Asian and Hispanic groups of students, but the most improved outcomes were found among boys and Latino students. The difference was so dramatic that co-author Dee admitted to being greatly surprised at the degree of positive impact. The results showed that enrolling in the ethnic studies elective improved general academic performance in terms of attendance rates, grades and credits earned, boosting attendance by 21 percentage points, GPA by 1.4 grade points and credits earned by 23.

The authors attributed the program’s success to the idea that culturally relevant teaching — when implemented in a supportive, high-fidelity context — provides effective support to at-risk students by insulating them from and combatting stereotypes, providing positive affirmation, and insulating them from the stereotype-induced anxiety and promoting a growth mindset. Co-author Penner, now an assistant professor at the University of California, Irvine, described the ethnic studies course as having an unusually significant impact on student achievement.

“What’s so unique about this program is the degree to which it helped the students who took it,” Penner said. “Schools have tried a number of approaches to support struggling students, and few have been this effective. It’s a novel approach that suggests that making school relevant and engaging to struggling students can really pay off.”