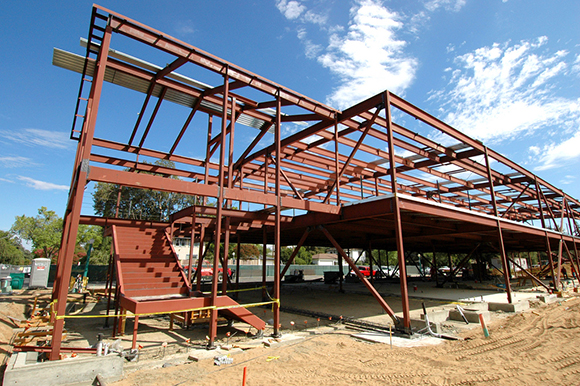 From master plans to bond financing to community campaigns, CSBA’s forum on school facilities on Dec. 4 in San Diego dove into the complex picture of school board members’ roles in facilities. A trio of panels included experts from bond campaign, finance and legal firms; construction management and architecture companies; and district officials who shared success stories.

The importance of getting a facilities program rolling

While largely exploring the technical aspects of facilities, panelists told the audience of more than 100 people that board members play a key role in setting the vision and direction of projects. Done correctly, the impacts of facilities projects go well beyond doors and windows and can build district momentum in other areas, said Chuck Kluenker with Vanier Construction Management. “A facilities program, once it gets rolling, can bring a lot of positive energy for the community,” he said.

There was also consensus that conducting a comprehensive needs assessment and creating a facilities master plan should be the first steps for districts that have not already completed or updated these documents. Board members must also always remember that they are at the controls of a trio of critical issues: the scope, budget and timeline of a project, said Tahir Ahad, president and CEO of Total School Solutions.

When a district turns to its community to pass a bond to help pay for projects, campaign specialist Joy Tatarka of firm TBWB said keeping the focus on student impacts is paramount. “What people care about is what happens in your classroom; so make it about kids in your classroom, not bricks and mortar,” she said.

In communities where it is difficult to pass large bond measures due to tax sensitivities or a lack of engagement or trust, Tatarka said districts can build a path to larger success by passing smaller bonds on top of each other. The concept that a district can’t go back to its community for facilities money all the time is a myth, she said, if results are being delivered. Tatarka also noted that passing a bond depends on building a broad coalition of community support, not just the obvious people involved in the school community.

How one district made a splash

Using that document as a launching pad to share a long list of pressing needs with the community, Superintendent Kent Kern said the district was able to position itself for unparalleled success in the 2016 general election. San Juan passed a $750 million bond with 69 percent voter support that year.

By upgrading and building facilities even in some of the district’s poorer neighborhoods, school board member Saul Hernandez said officials now have a strong rapport with many parents and community members. The position should prove important down the road, as Assistant Superintendent Frank Camarda said the $2.4 billion in needs has grown to about $3.5 billion since 2013.

“We feel good that we can pass more bonds in the future,” Hernandez said.

On a much larger scale, a $15 billion bond measure on the March 2020 ballot also ups the ante for board members to get up to speed on the world of school facilities. All of the bond funding procured through the passage of Proposition 51 in 2016 for school facilities has already been allocated, with districts and county offices waiting for the approval of roughly $2 billion in new construction and $2.6 billion in modernization projects. Forty-six and 61 school districts, respectively, are awaiting Prop 51 funds on the unfunded list for either new construction or modernization, according to the Office of Public School Construction.

Prior to CSBA’s annual conference, Delegates endorsed the $15 billion Public Preschool, K-12, and College Health and Safety Bond Act of 2020 that will appear on the ballot as Proposition 13. If approved, it would secure critical resources for the renovation and upgrading of existing classrooms, construction of new classrooms to accommodate growth and for career technical education facilities to provide job training.

The measure’s passage would inject $9 billion into the state’s preK-12 schools, while universities, four-year colleges and community colleges would each receive $2 billion.

“Our members have firsthand experience with the facilities that are home to our students during the weekday and they understand how critical healthy, nurturing environments are to both student well-being and student success,” said CSBA CEO and Executive Director Vernon M. Billy.

Assemblymember Patrick O’Donnell (D-Long Beach) made a guest appearance at the pre-conference facilities forum to encourage districts to pass resolutions supporting the measure, which his Assembly Bill 48 authorized to appear on the ballot. “Without a state match, you’re going to be hurting, for certain,” the chair of the Assembly Education Committee said of district facilities projects.