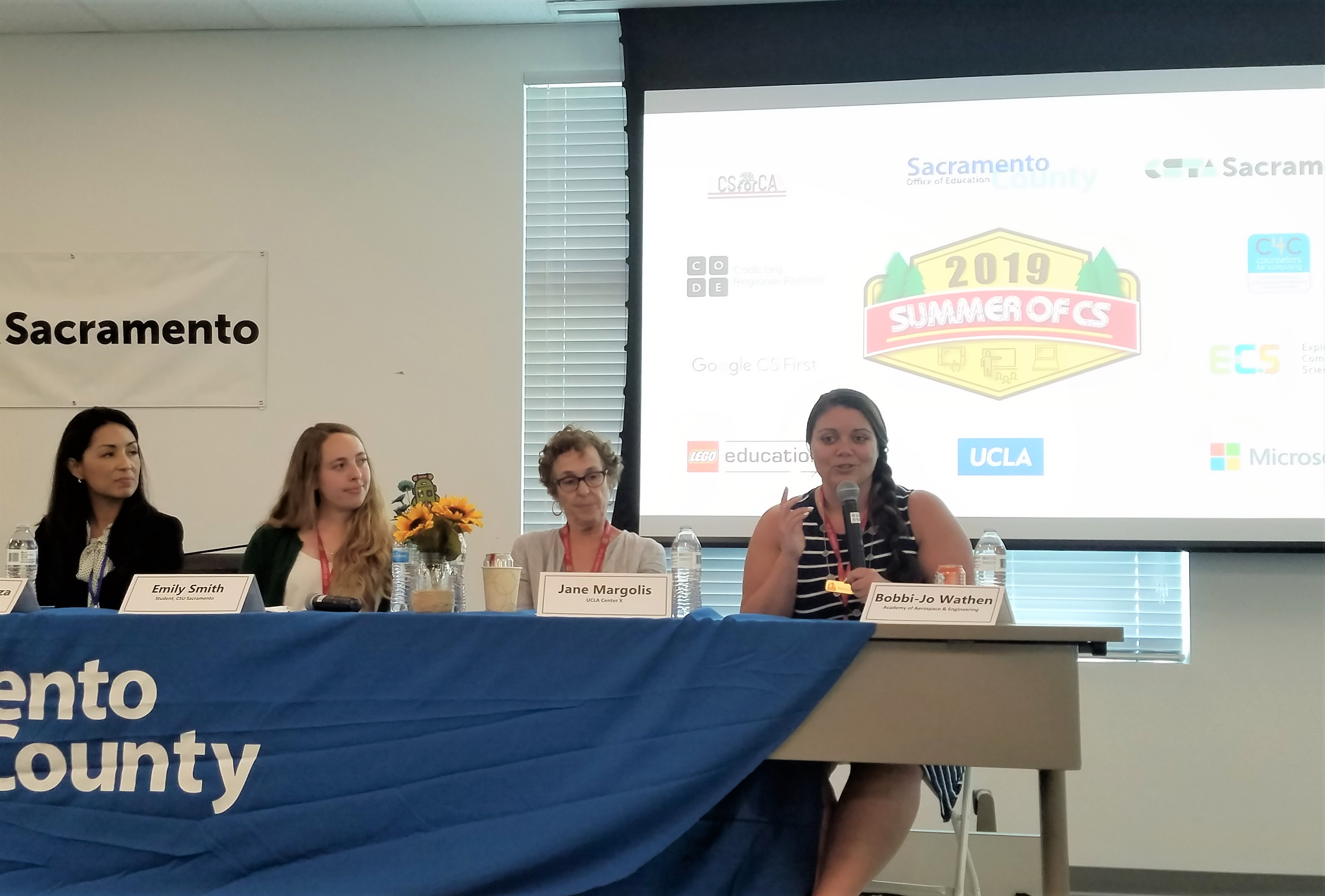 Ensuring access and inclusion for all students and teachers was key to the 2019 Summer of CS program hosted at the Sacramento County Office of Education, which also included a policy luncheon featuring an array of speakers representing industry, the Legislature and students. This annual multi-day event was presented by the Sacramento COE, the Alliance for California Computing Education for Students and Schools (ACCESS), and CSforCA.

In addition to the dearth of California high schools offering computer science courses, the Kapor Center’s new report calls out severe equity shortcomings in instances when classes are offered. Computer Science in California’s Schools: An Analysis of Access, Enrollment, and Equity finds that:

Several presenters at the Sacramento event addressed these inequities, saying that children from well-off backgrounds arrive in the classroom with a “preparatory privilege” that feeds educational and cultural biases about which groups of students are capable of mastering computer science — generally perceived to be white and Asian males.

“They were familiar with the computing, they had the resources at home, so when they came into school, they appeared to be just naturals at it,” said Jane Margolis, senior researcher at UCLA’s Center X and author of the recently updated book Stuck in the Shallow End: Education, Race, And Computing.

The Kapor Center data won’t just sit on a shelf, Margolis and others said, but rather will be used to create a California School Dashboard-like tool to build the capacity of county offices, districts and schools in expanding computer science offerings and making data-informed decisions.

Margolis helped found ACCESS and the Exploring Computer Science curriculum, which started in the Los Angeles Unified School District but is now found across the nation. CSforCA, the public-facing campaign for ACCESS, has a goal of providing, by 2025, every student in California with access to rigorous computer science education to college, careers and community.

Julie Flapan, ACCESS executive director and UCLA Center X Computer Science Project director, told attendees that California is making progress toward achieving that goal by way of new Computer Science Standards, a State Board of Education-approved implementation plan and through legislative efforts. Still, Flapan said, not everyone seems to realize how much of a demand there is for students to learn computer science. She cited poll data that there is a vast disconnect between the percentage of parents who want their children to learn computer science (91 percent) and the percentage of administrators who perceive a demand from parents (8 percent).

School boards are one avenue by which computer science can become a top-down priority for all students, as evidenced by San Francisco Unified School District’s resolution adopted in 2015 to expand computer science education to all students at all schools, beginning in pre-kindergarten and extending through 12th grade.

The work began in the 2013–14 school year when officials noticed computer science course enrollment mirrored the inequities of the tech industry, rather than the district’s diverse population, said Bryan Twarek, former computer science program administrator in SFUSD and new director of education for the Computer Science Teachers Association.

Using the resolution as a vision, the district piloted the computer science program by first targeting its most marginalized school sites and students, with organic growth from there. “If we focus the effort where it’s needed most, then other ones come along,” Twarek said.

Twarek and other speakers were also resolute that school leaders, teachers, parents and students need to know that 21st-century computer science goes well above and beyond typing lines of code, instead permeating nearly every industry and sector in a global economy. Beyond that, computational thinking is considered by many experts to be a new form of literacy and problem solving.