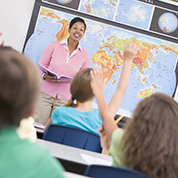 This month’s State Board of Education meeting on May 8 and 9 was packed full of interesting information, but little controversy, allowing the board to adjourn early on Thursday morning.

Common Core update
The agenda began with an update for the board on progress toward implementation of the Common Core State Standards with CSBA and other members of the Education Coalition encouraging the Board to support the proposal to appropriate unanticipated one-time state revenues to districts for Common Core implementation. All expressed the need for technology equipment, instructional materials and professional development to be ready for upcoming assessments. The board also took action to approve reviewers for both Mathematics primary adoption materials and English Language Development supplemental materials to expedite the availability of materials aligned to the Common Core.

Student assessments & achievement
Speaking of assessments, an update on those being developed by the Smarter Balanced Assessment Consortium showed progress on test development including the conducting of cognitive labs, small-scale trials and the almost completed assessment pilot to ensure validity of the tests for 2014-15. The process is also validating methods of special presentation styles for special needs students.

Next to come is the one-year public field test of the system to develop customer familiarity. Teachers, administrators, students, parents and community members will all have access to a sample test to become familiar with how the questions are structured and how the test is taken. While collecting results is not necessary for research on validity, some level of feedback will be available to school districts for their own use in judging preparedness.

Sample items will also be available for English Language Learners. They are currently researching the best method to deliver ELL tests. Options include a side-by-side translation, which may be easier but tied to one dialect, or a pull-down glossary of terms that could offer a variety of alternatives for the word. The final decision will be research-based.

It is important to note that while the test can be given on an iPad, it cannot be given on the tablet’s smaller mini version.

New science standards
The board followed these updates with actions to move the process forward including taking input on the potential of adopting a California version of the Next Generation Science Standards to replace our 15-year-old science standards. More than 80 people worked on the California team and submitted substantial feedback to the consortia. Representatives of the California Science Teachers Association endorsed the proposed standards and, following adjustments for public input, the draft standards are likely to return in July for adoption by the SBE.

Additional information was provided about the online science test pilot, where members recommended phasing in adaptive testing slowly. As for the transition of the English Language Development Test ( CELDT) to the new English Language Proficiency Assessments for California (ELPAC), that work is contingent on additional funding for CDE’s work in the upcoming budget. That transition will mean aligning current items to the Common Core and creating new items, moving to a spring administration of the test and developing a fall screening test aligned to the new ELD standards.

API changes and other issues
Other issues included an update on possible changes to the Academic Performance Index. The Board came down on the side of taking their time to add items all at once rather than one at a time, in light of the many changes coming forward in assessment and instruction. I’ll review that conversation in another blog.

On the issue of Capital Appreciation Bonds (CABs) that have been in the news lately, despite CDE recommendations for a prohibition on the use of CABs, the board granted waivers of district bonded indebtedness limits without that criteria.