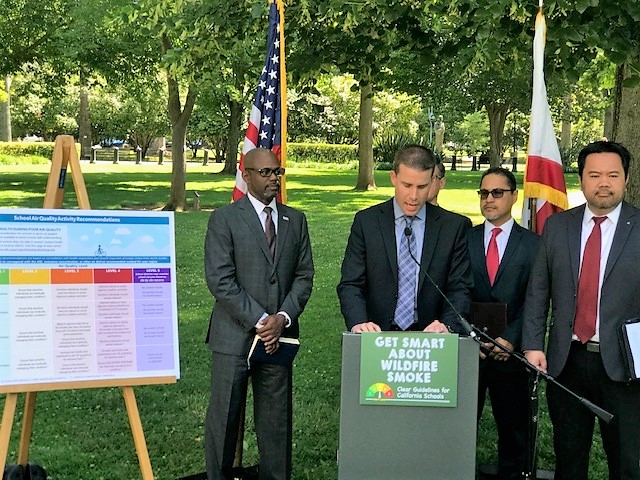 Last year, one of California’s most destructive wildfire seasons on record resulted in school officials hundreds of miles from the disasters making difficult decisions amid toxic smoke and unhealthy air, oftentimes without formal guidance or existing policies. Concerned parents and community members questioned whether schools were taking the proper steps to determine whether they should limit or cancel outdoor activities or close campuses altogether.

As the state’s schools head into summer break and Californians brace for a new wildfire season, a coalition has released first-of-its-kind guidance on school air quality recommendations for districts to review prior to the 2019–20 school year. Officials from several agencies and organizations, including CSBA Immediate Past President Mike Walsh, discussed the new tool at a June 4 press conference at the State Capitol hosted by state Sen. Mike McGuire (D-Healdsburg).

Using a color-coded grid breaking down activities such as recess and athletic events, the template recommends action to be taken — from no restrictions to no outdoor activity — based on consultation with health researchers and principles drawn from recent studies.

A trustee for the Butte County Office of Education and an Oroville resident, Walsh addressed the great need to provide such a resource for districts and county offices of education as California adapts to longer and more severe wildfire seasons.

“It was relatively easy to explain or relatively easy for everyone to understand the decisions we made in Butte County regarding the Camp Fire, the impact on Paradise and Concow, those two towns where the fire was the most destructive,” Walsh said. “What wasn’t always that easy to explain, or to offer assistance on what to do, was for counties and districts that were being impacted by the toxic fire that were up to hundreds of miles away.”

While some districts and county offices of education have strong relationships and protocols developed with their local air resources district or health department, McGuire said the vast majority of local educational agencies have not created their own guidelines.

“As we have seen over the last several years, wildfire smoke can, and has, blanketed dozens and dozens of communities hundreds of miles away from the location of the wildfire for the greater park of a week,” he said. “The lack of guidelines and information has resulted in some instances of haphazard decision making.”

Added Juan Mireles, director of the CDE’s School Facilities and Transportation Services Division, “Without guidance from the state on what to do during these unhealthy air conditions, our school leaders have struggled to make decisions to protect their students. That has been a problem for so many of our schools for too long.”

Though the CDE will distribute the guidelines to every district throughout the state, administrators and board members should consider the document as a template that can be modified to consider local characteristics and factors, said Tung Le, executive director of CAPCOA. “These guidelines are not meant to replace any existing programs that the air districts or school districts may already have in place, rather they are a roadmap to start a dialogue,” he said.

Echoing that the air quality guidance reinforces the importance of local control and decision making, Mireles and Walsh said they believe the resource will lead to better conversations and relationships between parents and school leaders.

“One of the things for us that we really appreciate about the guidelines is that it’ll create a conversation for parents that they can have with their districts,” Walsh said. “And that again, we want the students in the seats, and for parents to have the faith and the belief that we are making the most healthy choice for the child, and that we have their interest at heart — we think that’s a win.”

And considering the question about the next devastating California wildfire is likely not if, but when, Mireles says now is the time for districts to review the guidance, prepare plans and have conversations with the communities. “We recommended that all schools review them now, before they experience unhealthy air conditions,” he said.