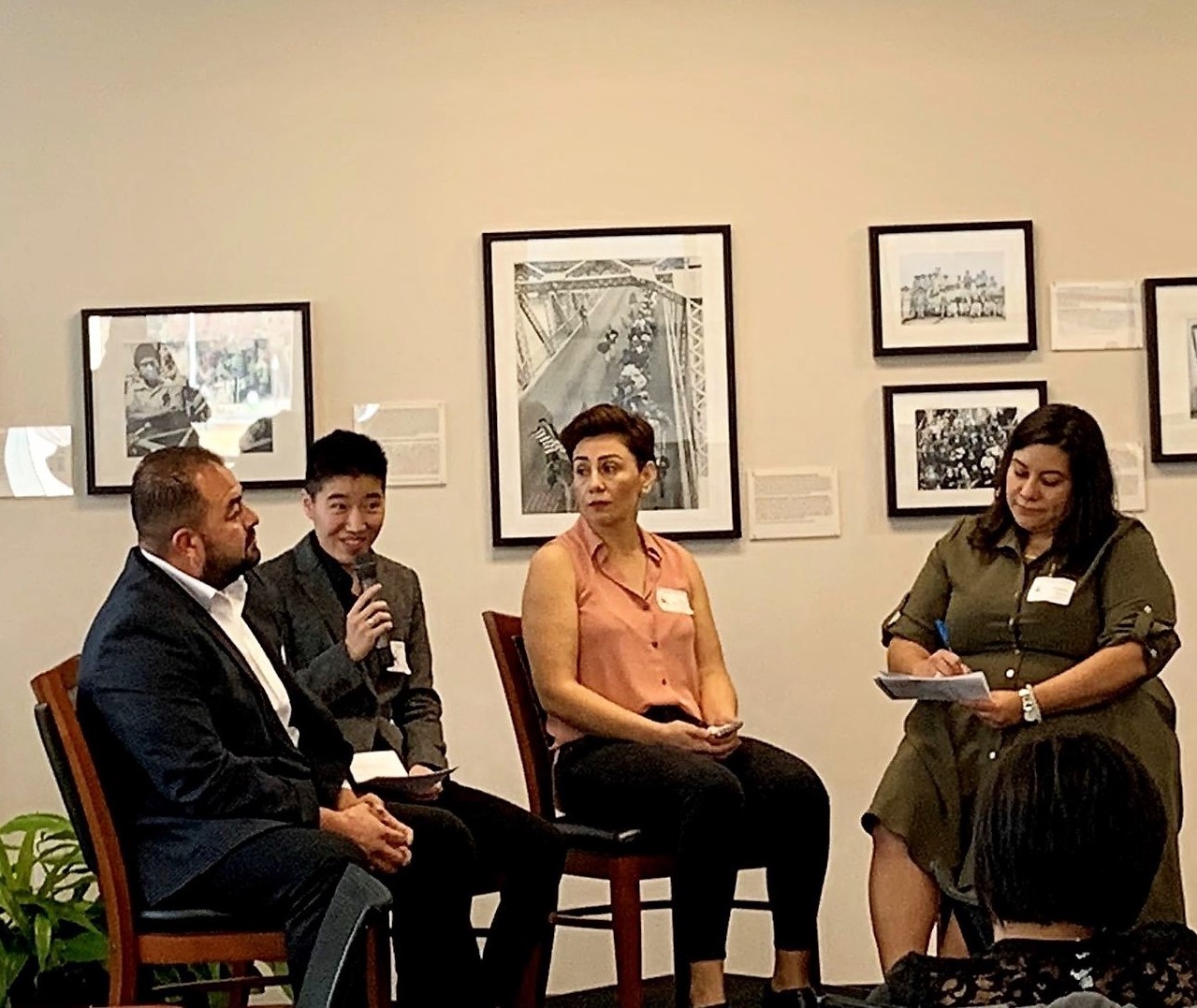 One in six California K-12 students has at least one undocumented parent and approximately 250,000 of the state’s students ages 3–17 are undocumented. Recognizing the increasingly difficult climate facing these students, Californians Together presented the Statewide Convening for the Support of Immigrant and Refugee Students on Nov. 14 at the Consulate General of Mexico in Sacramento. The event was part of a support project headed by the organization’s Director of Policy and Initiatives Xilonin Cruz-Gonzalez, who also serves as CSBA President-elect.

“We’re here to make sure that there is safety and dignity for all of our children,” said Shelly Spiegel-Coleman, Californians Together executive director, in opening the event.

The gathering took on added meaning as it came just two days after the U.S. Supreme Court heard arguments in its closely watched case over the Deferred Action for Childhood Arrivals program, or DACA. Several speakers reflected on the coincidental confluence of events, saying they were Dreamers, or among those awarded temporary protection from deportation. Nearly 200,000 DACA recipients live in California, by far the largest number of any state, according to the Migration Policy Institute.

Providing a welcoming environment and opportunities

The day’s first panel featured discussions on humanizing immigration issues and improving school environments. With the amount of uncertainty facing many immigrants and their families in the U.S., schools must work harder than ever to project a message of hope rather than fear, said Manuel Bautista, director of educational services at Mendota Unified School District.

Several years ago, the six-school district west of Fresno was experiencing an influx of about 150 undocumented students each year, largely from El Salvador. Bautista said district officials quickly realized they needed to present opportunities and outlets for these students so they did not retreat into the violent and impoverished lives many of them had escaped. “It felt like it was a shadow that just kept coming behind them,” Bautista said. “And that was something that we really needed to counter.”

Typical media depictions of immigrants focus on Latinos migrating to the U.S., however, the immigrant experience stretches across numerous racial and ethnic groups. UCLA graduate student Annie Kao came to the U.S. from Taiwan in middle school, becoming an undocumented Los Angeles Unified School District student who was raised by her grandparents.

With her culture’s norms rooted in preventing family shame, Kao said she couldn’t talk about her experiences or situation with anyone — at home or at school — until she neared her time in college. “I was living in the dark for years, really depressed, thinking there is no way out for me, even though my family told me that I was going to be here to stay,” she said.

Mendota Unified’s Bautista reiterated that all schools should strive to provide students with a safe and welcoming environment that is conducive to presenting opportunities. “Unfortunately, I think that the opportunity is dependent on who greets you at the front door,” he said.

Dora Duena, a parent in the Sacramento area’s San Juan Unified School District, echoed Bautista’s sentiments. She said she wants people to know that undocumented people are the same as documented people and simply “want an opportunity to belong.”

Mendota Unified now uses a centralized enrollment system, where staff in one location can learn about students’ backgrounds, what services they need and provide them with items such as backpacks and food. “What you put on paper is important, but really what matters is that first engagement with that family,” Bautista said of district policies.

The disconnect between policy intention and practice can be common at districts and school sites, speakers on later panels agreed.

Civil rights attorney Deborah Escobedo provided an update on Assembly Bill 699, which, among other things, dictates that local educational agencies must not collect information regarding citizenship or immigration status of students and their families. She said there are examples of districts that have passed impactful sanctuary school resolutions but aren’t in compliance with AB 699 and that it’s critical for LEAs to review their enrollment forms to not only check for compliance, but to ensure the documents are easy to find, parent-friendly and available in several languages.

Additionally, Ruth Barajas of Californians Together said there is the continued mindset for some within education of “we’re not going to do it until its mandated.” Some LEAs fall back on this defense when they could instead be looking at which best practices could help students and families, she said.

With immigration remaining a taboo topic for schools and society at-large, Aurora Garcia-Barrera of the Children’s Partnership said the guiding question for education leaders should be, “How are we creating these safe spaces for folks to be able to get the information they need?”

Resources to help support immigrant students and their families: