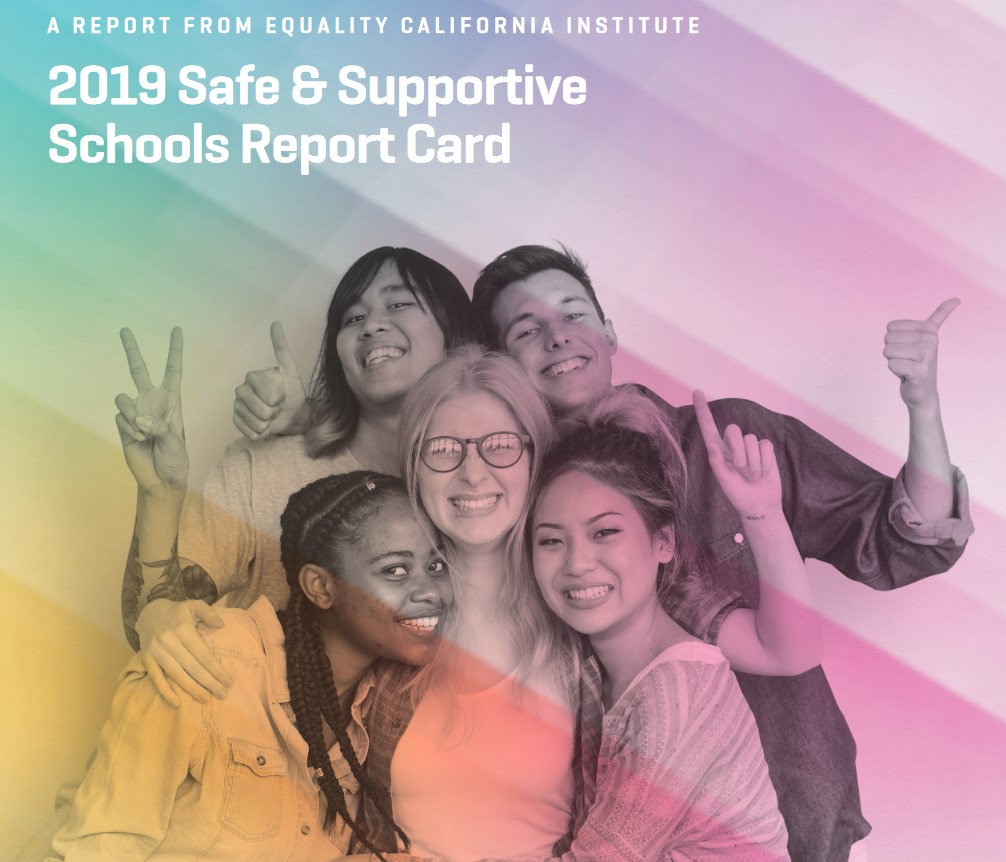 A first-of-its-kind report card finds that many of California’s unified school districts must improve their implementation of LGBTQ-inclusive programs, policies and curriculum. The Equality California Institute surveyed and assessed 130 unified districts across the state to produce the 2019 Safe & Supportive Schools Report Card.

While the institute reports that great gains and protections have been achieved for California’s LGBTQ students through the Legislature in recent years, policy implementation and management greatly varies at the district governing board level.

Some districts have succeeded in providing safe and supportive environments for all students, while others have faced challenges. Districts notably self-reported shortcomings in the areas of cultural competency training, support for transgender and gender-nonconforming youths, and inclusive curriculum.

“Legal requirements are merely a foundation upon which to build comprehensive policies that protect and nurture LGBTQ students,” the report reads. “Many school districts lack the resources to implement these laws, face hostile local social climates that impede implementation or lack awareness regarding the laws’ requirements and the best way to meet them.”

Equality California sent the survey to all 343 unified school districts in California in November 2017, but nearly 62 percent of them did not respond. The survey focused on five main topics related to the health and well-being of LGBTQ students and school staff: school climate, cultural competency training, transgender and gender-nonconforming students, curriculum and suicide prevention.

The responses were then used to place each district into one of three tiers, reflecting how much progress districts have made in fostering a safe and supportive school climate for LGBTQ students. Twenty-two districts made the top tier, reserved for those reporting more extensive programs and policies; a majority of districts, 80, were classified in the middle tier, indicating some basic or initial steps have been taken; and 28 districts have made some steps but lack resources, understanding or commitment to fully implement programs and policies. (District summaries showing more detail begin on page 45 of the report).

Among the key general survey findings:

The findings support many of the issues highlighted in a groundbreaking Human Rights Campaign report in which CSBA was a partner. The report reveals that many of California’s LGBTQ students are not receiving adequate support and offers recommendations for board members to better serve those youths.

“As policymakers, school board members can set the standard for school culture and lay the groundwork for environments where LGBTQ students feel accepted and empowered to learn,” CSBA CEO & Executive Director Vernon M. Billy said upon the release of the HRC report. “The report highlights an important topic — the disproportionate risks to physical, social, and emotional health suffered by LGBTQ students — that schools can address through research-based policies and practices.”

“We need to empower teachers and school staff by giving them the tools and training necessary to support their LGBTQ students,” Thurmond wrote. “We must be proactive in adopting and implementing policies that make our schools safer for all students. And we need to ensure that the curriculum taught in our schools is inclusive of the LGBTQ community.”