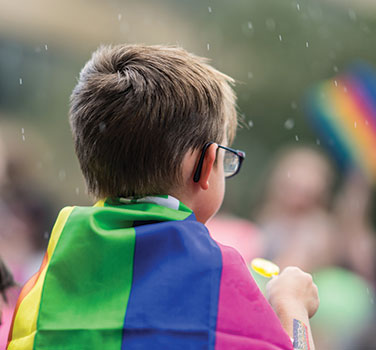 In a classroom combining first- and second-graders in San Diego, California, a child began the pre-pandemic school year with short hair, sporting jeans and T-shirts similar to all the boys in class. Over the course of the year, the child grew their hair long and began to wear more flowery, colorful clothing. One day, the student’s mother approached the school counselor, David Valencia, to report her child was being teased and feeling insecure in class.

Valencia then made it a point to engage and check in with this student on a regular basis to get a better understanding of how they were feeling. While adults must be careful not to stick a label onto a student without really making sure they have the developmental understanding of what it means, educators can provide a safe engaging place to develop the language themselves.

When delivering the social-emotional curriculum to this student’s particular class, for instance, Valencia said he would tailor lessons to also include acceptance, defining what love is and acknowledging that “who we choose to love is not directly associated with our gender at birth. These weren’t necessarily high-level concepts, which is always the pushback. Students will surprise you with what they can understand and how they can understand it,” he continued.

Small but symbolic gestures can help wear down falsehoods surrounding gender norms — the things considered to be normal or acceptable for boys, or normal and acceptable for girls. This same student, as an example, loved scrunchies, and when it came to his attention that students were teasing the student about it, Valencia took one of his partner’s scrunchies and wore it around his wrist at school in order to normalize the idea that boys having long hair or wearing scrunchies wasn’t all that weird. Being able to show a picture of Jason Momoa — known for his roles in Aquaman and Justice League — wearing a pink scrunchie on his wrist only helped drive the point home.

Every June, the celebration of Pride Month provides local educational agencies an opportunity to focus their attention on the needs of their LGBTQ students. “These students are here and they are operating amongst some of our most vulnerable populations on school campuses — they’re some of our most bullied and harassed,” said Valencia, a San Diego-based school counselor. “It’s important to acknowledge their humanity, it’s important to acknowledge who they are and who we would like to be as a community that respects all our wonderful differences and can coexist with one another with empathy.”

What the data show, what it leaves unsaid

The Trevor Project’s 2019 National Survey on LGBTQ Youth Mental Health found that LGBTQ youth who reported having at least one accepting adult in their lives were 40 percent less likely to report a suicide attempt in the year prior. That 40 percent would represent a significant number of children. According to the Centers for Disease Control and Prevention, lesbian, gay and bisexual students are almost five times as likely as their straight peers to attempt suicide — with the number even higher for those who are transgender.

It’s important to talk about suicide rates, but it’s more important that schools actually address issues that are happening on campuses which make suicidality a reality, Valencia said.

“We haven’t really addressed harassment, homophobia, transphobia — not just at the student level but at the staff level too,” he explained. “Those little comments that we say to students that cut them down every single day. These small things add up to a culture that would lead a student to not have faith in the system and feel like there’s nothing more to do than to self-harm.”

That said, school counselors and teachers are absolutely well positioned to be that positive, influential model in a kid’s life, but time needs to be carved out during the school-day when children are on campus to build these relationships, Valencia said. Without enough face-to-face time with children in the hours they’re on campus, educators feel like they’re playing catchup in working to understand their students, he said.

“How do you make up a missed opportunity to engage with a student who desperately needs it?” Valencia asked.

What can be done to better support LGBTQ youth?

Knowing that school and district administration and policies support and protect them is no doubt beneficial to the wellbeing of LGBTQ youth, and educators and counselors can and should advocate for such protections, Valencia said. However, there are smaller, more personal actions adults can take too.

Providing name tags with a section for students to include their preferred pronouns, or simply moving away from gendered language — like addressing groups of students as “y’all” and “everyone” instead of “guys” — can prove small but meaningful steps, he explained.

“It’s important to take some time to self-reflect on the language that we use,” Valencia said. “We have to be able to self-reflect and to indict ourselves when need be and to provide some accountability on how we use language, how we talk to students and whether or not we understand if that’s inclusive.”

And as students return in larger numbers to in-person instruction this fall, it is likely they will be coming back with challenges similar to other student groups, but for different reasons. Research shows that the majority of LGBTQ students depend on key support at school, even — and especially — if they’re not out publicly or at home. This support may come from friends, school staff or clubs such as the gay-straight alliance. It is likely during the extended closures that many LGBTQ youth were unable to safely live as their full, authentic selves, which can be mentally exhausting.

Going into the next school year will require counselors and educators to take a trauma-informed approach when addressing students, Valencia said. And with so many students likely returning with new or worsened trauma, the flexibility to spend time with them and make meaningful inroads will have to be build into everyone’s schedules — especially school counselors.

“Something the shutdown did so effectively was exacerbate current issues in our society — every single issue from the top down. With students who already didn’t feel like they wanted to talk to school staff or didn’t feel they had an outlet to, being stuck at home definitely did not help that. There are absolutely going to be a lot of trust issues, and a lot of behaviors that are going to come to the surface because the underlying issues were already there, and now it’s just overwhelming,” Valencia said. “This is an urgent issue. Flexibility will need to be built into counselor’s schedules so that they can be available to these students. Having flexibility in our schedules will need to be a priority to accommodate a trauma-informed approach.”