California schools are encouraged to take advantage of a free program to test water taps for toxic metals. Triggered by increased public awareness of lead contamination in schools,  the California Water Resources Control Board and the California Department of Education launched the free testing program for schools in January 2017. Lead contamination has been linked to neurological disorders and impaired cognitive ability. The free testing is available until Nov. 1, 2019.

A new San Francisco Chronicle investigation found that “two-thirds of the state’s 1,026 school districts have not taken advantage of a free state testing program to determine whether the toxic metal is coming out of the taps and, if so, whether it exceeds federal standards.” The Environmental Protection Agency’s threshold of the amount of lead in water requiring action is 15 parts per billion. The Chronicle reported some of the state’s schools are far above that amount and just 3,133 of California’s 10,000 schools had filed test results by the end of the 2017–18 school year.

Drinking contaminated water is likened to drinking from a lead-coated straw. Once ingested, lead contamination can lead to health and developmental problems. Children under the age of six and pregnant women are particularly vulnerable.

Typically, exposure to toxic metals in drinking water comes from older fountains, faucets and rusty pipes that have corroded and then mixed into the water supply. (Water arriving at school sites has already been tested for safety by local utilities.) Schools built before 1986, when the Safe Drinking Water Act reduced the amount of lead content in water, are especially likely to have older water infrastructure. 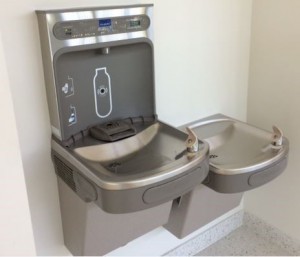 Some schools have aimed to offset these risks by supplying bottled water to ensure students are drinking safe water, but the approach is expensive. Other districts flush water from fountains used for drinking and for food preparation for a minimum of 30 seconds each morning to remove overnight accumulation.

The state program offers a ready, free way to ensure water quality, and school districts are encouraged to take part. And if any schools in your district were constructed before Jan. 1. 2010, their water is required to be tested for lead levels by July 1, 2019, under Assembly Bill 726, which went into effect Jan. 1 of this year.

“It is disappointing to see that a large number of districts have yet to take advantage of this program,” said Troy Flint, CSBA senior director of communications. “It would make sense for every district to jump at the chance to find out if they have a problem with lead in their system and to correct it.”

Schools in disadvantaged communities with water supplies that have tested high for lead levels can apply for grant funding for projects that improve drinking water quality and access.

CSBA: School and county boards encouraged to submit requests for free water supply lead sampling; mandatory testing could be implemented as soon as 2018