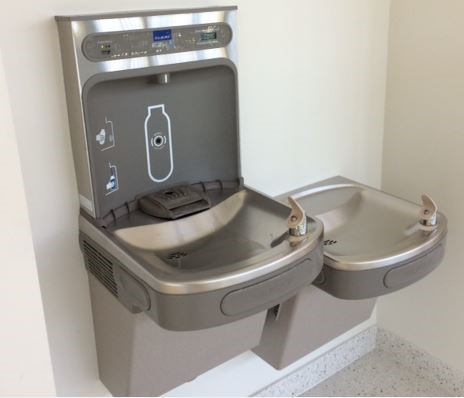 As School Nutrition Month kicks off in March, California is making progress on a key issue impacting daily nutrition at school — water.  But there is still room for improvement and a need for more information, a recent report finds.

The report, “Early Adopters: State Approaches to Testing School Drinking Water for Lead in the United States,” concluded that 3 percent of California’s K-12 public schools had at least one tap with an elevated level of lead in water and 1 percent of all taps tested in the California’s public schools had shown lead levels at or above the level requiring action — 15 parts per billion per one liter of water.

However, the results are based on testing at just 22 percent of the state’s more than 10,000 K-12 public schools. Previously, California offered schools free tap water testing for lead on a voluntary basis through a program of the State Water Resources Control Board. Now, under Assembly Bill 746 (Fletcher-Gonzalez, D-San Diego), community water systems are required to test five outlets at all California public K-12 school sites that were constructed before 2010 by July 1. According to the California State Water Resources Control Board, less than half of California’s roughly 11,000 public schools (4,429) have been tested so far.

“We have yet to know what testing for the remainder of the schools will reveal,” said Christina Hecht, senior policy advisor at the Nutrition Policy Institute at UC Berkeley Division of Agriculture and Natural Resources and contributor to the report.

Other factors also make it difficult to determine how much lead is in the drinking water at California’s schools. “California only tests only five taps per school — our study found that testing more taps increased the chance of finding lead,” Hecht said.

Further, the “action level” for lead — the amount triggering  action — is being examined. The Environmental Protection Agency is expected to decide on the figure this spring. (The federal Food Drug and Administration has set its own standard for allowable lead amounts in bottled water at five ppb.)

California also samples tap water at “first draw,” or the first sample of water after a period of stagnation, rather than testing subsequent samples from the same source. The practice allows for testing wate r that has been sitting in pipes overnight, which is often presumed to have the highest concentration of lead.

“Evidence shows that this is not always the case, and sometimes a later draw will have a higher concentration,” Hecht said.

Although schools may feel uncertain about how best to manage lead in drinking water, remediation techniques include replacement of lead-containing plumbing parts, flushing out pipes by running water from faucets and fountains to prevent stagnation, or installing filters that remove lead. A few schools in California provide their students with bottles of water to prevent them from drinking from contaminated pipes.

Given these findings, schools and districts across California are encouraged to test for lead and to take advantage of state remediation programs. Typically, lead can be found in older pipes, water fountains, faucets, solder and other plumbing fixtures.  This is particularly true for schools built before 1986, when the Safe Drinking Water Act reduced the amount of lead content in water. Older pipes, too, can corrode and lead can mix into the water supply.

Drinking such contaminated water can lead to health and developmental problems, and impair cognitive ability. Children under the age of 6 and pregnant women are particularly vulnerable.

Read the report from the Nutrition Policy Institute and the TH Chan School of Public Health at Harvard University.