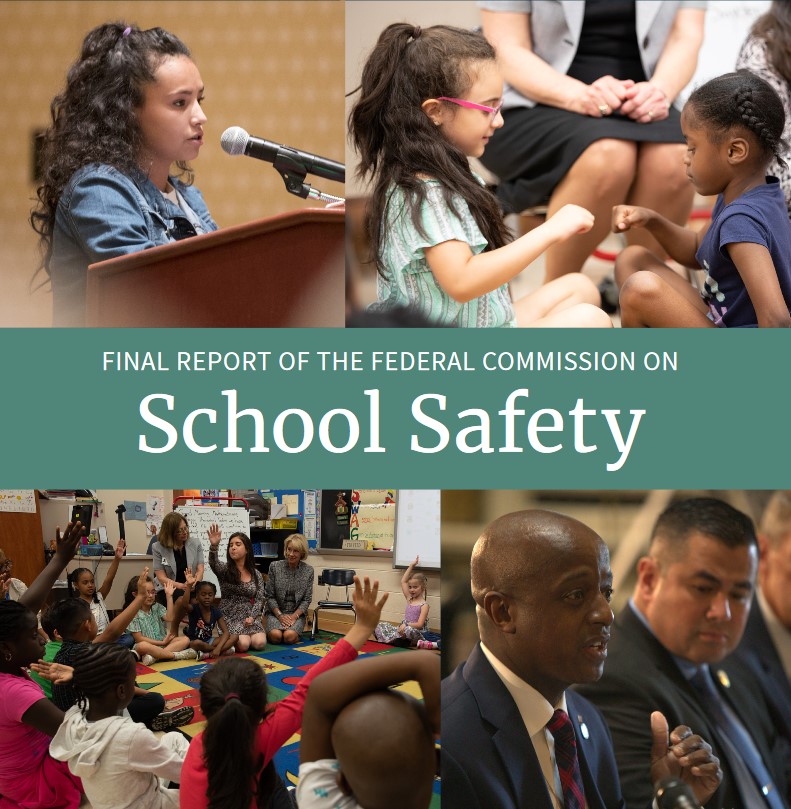 A wide-ranging report has intensified the debate over appropriate methods of discipline in a time of increasing concern about student safety. On Tuesday, Dec. 18, the Federal Commission on School Safety released what the U.S. Department of Education called “best practices and policy recommendations for improving safety at schools across the country.” The Commission was established in response to the February 2018 mass shooting at Florida’s Marjory Stoneman Douglas High School and charged with identifying ways to make the nation’s schools more secure.

“Each of us has an important role to play in keeping our students safe while at schools,” Chair of the Federal Commission on School Safety and U.S. Secretary of Education Betsy DeVos said in a press release that accompanied the report. “Through the Commission’s work, it has become even clearer there is no single policy that will make our schools safer. What will work for schools in Montana will be different than what will work for schools in Manhattan. With that in mind, this report provides a wide-ranging menu of best practices and resources that all state, community, and school leaders should consider while developing school safety plans and procedures that will work for students and their teachers.”

Many of the report’s 93 suggestions, such as improving student access to counseling and mental health services, encouraging a “culture of connectedness” and implementing cyberbullying protocols were uncontroversial. The report’s recommendation that the Trump administration rescind Obama-era guidance on school discipline, however, generated substantial debate, as did its decision to largely omit recommendations on gun control. Issued jointly by the DOE and the U.S. Department of Justice, the 2014 policy discouraged “zero-tolerance” approaches to school discipline, advocated less punitive alternatives for minor infractions than suspensions and expulsions, and emphasized the importance of reducing disproportionate discipline.

“CSBA has made it a priority to advocate for legislation, resources and policies that make our schools more secure and our students safer,” said CSBA President Dr. Emma Turner. “We will continue to pursue a multifaceted approach to student safety that encompasses positive school culture, modern facilities and infrastructure, training and best practices for students and staff, mental, social and emotional health, and coordination with government and emergency response agencies. At the same time, we will resist strategies that disenfranchise students in the name of the safety when there are more constructive methods of discipline available.”

The national debate should have limited practical impact on California, where state laws designed to eliminate disproportionate discipline exist independently of the Obama-era recommendations now targeted for withdrawal by the Federal Commission on School Safety. California Education Code Section 234.1 mandates that districts adopt policy and regulations to ensure that district programs and activities are free from unlawful discrimination.

Even if the 2014 guidance is withdrawn by the Trump administration, California schools still must comply with California Education Code requirements which address many of the same issues highlighted by the 2014 guidance. For example, Education Code Section 48900, amended in 2014, eliminated the authority of school districts to suspend students in kindergarten through third grade from school for disruption or willful defiance. The amendment also removed willful defiance as grounds for expulsion under any circumstances. A March 2015 fact sheet, jointly produced by CSBA and Public Counsel, explains the rationale for the law and offers resources for proper implementation.

“Effective teaching and learning cannot take place unless students feel safe at school,” then-U.S. Secretary of Education Arne Duncan said when the 2014 guidelines were released. “Positive discipline policies can help create safer learning environments without relying heavily on suspensions and expulsions. Schools also must understand their civil rights obligations and avoid unfair disciplinary practices. We need to keep students in class where they can learn. These resources are a step in the right direction.”

In April 2018, the Department of Education’s annual Civil Rights Data Collection report indicated that inequitable discipline remains a significant problem in American schools. An EdWeek examination of the data determined that in 2015-16, schools issued out-of-school suspensions for 2.7 million students, a decrease of roughly 100,000 students from 2013-14 (there are roughly 50 million pre-K-12 public school students in the U.S.). In 2015-16, black boys made up 25 percent of all students suspended at least once and black girls accounted for an additional 14 percent, even though each group accounts for only 8 percent of the student population. Those numbers are essentially even with the results from the DOE’s 2013 Civil Rights Data collection.

Similarly, black students made up 15 percent of all students in 2015-16, but 31 percent of those arrested or referred to police — a disparity that has grown by 5 percentage points since 2013-14. Students with disabilities represented 12 percent of the overall student enrollment and 28 percent of police-involved student incidents s in 2015-16.

On Tuesday, Duncan and his successor, John B. King, Jr., released a joint statement on the 2014 school discipline policy which stated that, “We put this guidance in place to start a conversation about these harmful practices and encourage advocates and policymakers to look more deeply into why these disparities exist and to intervene when necessary.”

Critics maintain that the Obama administration policy has the potential to compromise safety by making schools reluctant to implement appropriate discipline. Supporters argue that overly strict discipline is counterproductive as it undermines school culture, student engagement and academic achievement, while increasing truancy and dropout rates, which are predictors for incarceration.

On Tuesday, State Superintendent of Public Instruction Tom Torlakson issued a response to the Commission’s report noting that he was “extremely disappointed” the School Safety Commission report “contains a misguided recommendation to eliminate a policy that has nothing to do with the continuing tragedy of school shootings — the quest for disciplining students in a proportionate, fair manner.”

A CSBA brief focusing on issues crucial to equity in public schools — including disproportionate discipline — will be published in early 2019. In the meantime, for additional resources related to student safety and school culture, please visit www.csba.org/schoolsafety.