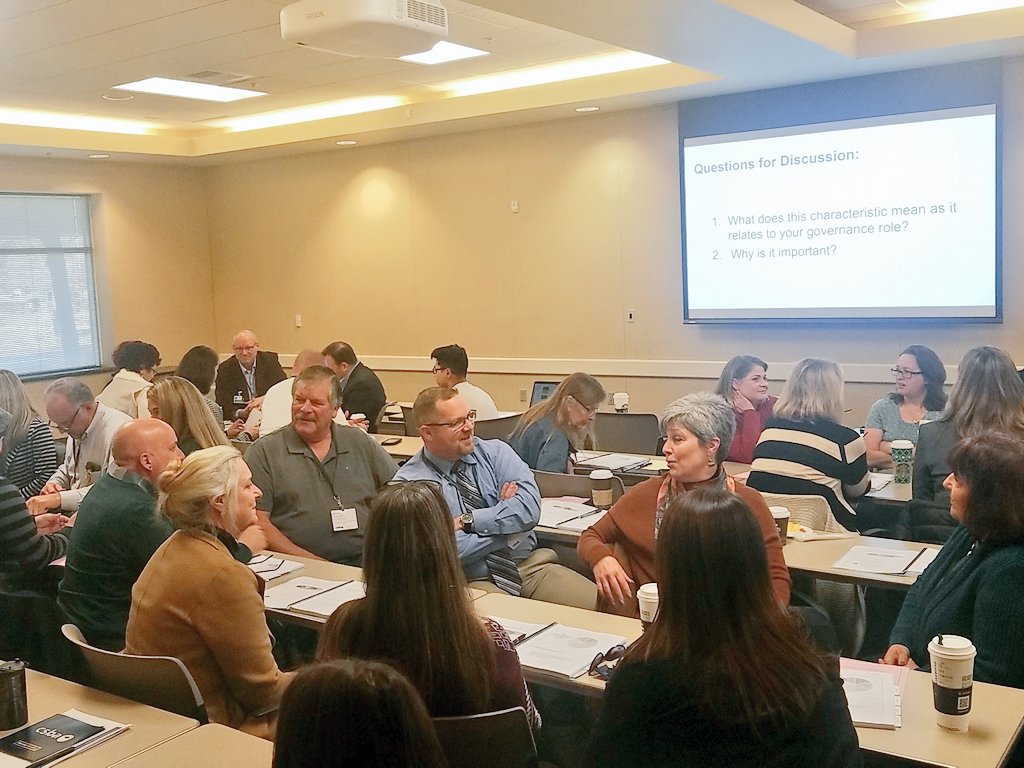 From the Redwood Coast to the Coachella Valley, about 80 newly elected district and county board members gathered Jan. 3-4 in Sacramento to focus on “what’s next.” With their campaigns finished and a largely procedural first board meeting under their belts, attendees learned about effective governance, finance, human resources and student learning at CSBA’s popular Institute for New and First-term Board Members.

Governance Consultant and CSBA Past President Luan Burman Rivera started the program by outlining the key concepts of effective boards and teamwork. She stressed that new members need to check their individual campaign promises at the door and focus on the successes of the governance team.

Rivera also recalled her nervous first days after winning a seat on the Ramona Unified School District governing board in 1994, advising new board members to ask questions, develop relationships with fellow trustees and their superintendents, and to keep lines of communication open. “I think it’s one of the most rewarding things I’ve ever done,” she said of her role as an elected official, which ended with her retirement in 2010.

With experience as both a community organizer and in student government at Napa Valley College, Mario Fernandez said he comes into his new role as a member of the Eureka City Schools board of trustees with a knowledge of terms such as Local Control Funding Formula and Local Control Accountability Plan but is still learning about how they work at a board level. “I’m grateful that this is kind of 101 basics,” Fernandez said on day one in Sacramento.

In addition to his new member training, Fernandez said he plans to attend CSBA’s Legislative Action Day on March 12 at the Capitol, as he said there is only so much a person can do to advocate for state funding at a local level. The success of the state’s public education system, he said, is directly tied to society’s successes. “The schools are going to have a really profound impact on our communities,” Fernandez said.

For newly elected Desert Sands Unified School District board member Ana Conover, the CSBA institute helped answer “not knowing what to expect after the campaign.” A teacher of 19 years in a neighboring district, Conover’s interest was piqued by Rivera’s conversation about how different a school board role is compared to a district staff role. “I’ll see the bottom and I’ll see the top,” Conover said of her perspectives.

Desert Sands USD will need to focus on chronic absenteeism and getting kids to school, she said in anticipating some of the key issues on the horizon in her first term. The problem not only causes students to fall behind in class but also costs the districts money due to decreased average daily attendance numbers.

Institute attendees also dove into the financial realities of running a district when they heard a presentation from Debbie Fry and Sheila Vickers of School Services of California Inc. “We are woefully underfunded in California,” Vickers said in describing the state’s K-12 funding level compared to the national average, a fact that surprised some new board members and spurred conversations about ongoing legislative efforts and CSBA’s Full and Fair Funding campaign.

While the two-day program offered overall concepts and recommended best practices, presenters continually highlighted the importance of adapting policies and protocols to meet local needs. As such,  institute participants represented a wide range of student populations — from 121 students enrolled to 36,000 — and a variety of school district type and locations, from urban to rural.

An additional opportunity for new board members to participate in CSBA’s institute comes to the San Diego Office of Education on Jan. 25-26. Registration info and more details can be found on CSBA’s training and events webpage.