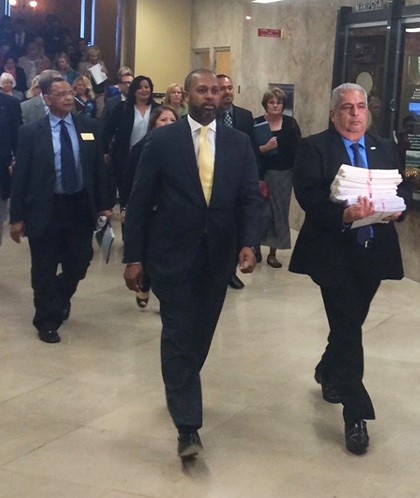 150 and 800. Those were key numbers for CSBA on Legislative Action Day  held on Tuesday, March 10.

More than 150 members advocated for education in meetings with state representatives and more than 800 letters and resolutions called for a repeal of a reserve cap contained in SB 858. With repealing the cap CSBA’s top legislative priority in 2015, CSBA President and Moreno Valley Unified School District board member Jesús M. Holguín and CEO and Executive Director Vernon M. Billy personally delivered the resolutions and letters wrapped in a red ribbon to Gov. Jerry Brown’s office at noon.

Meanwhile, the halls of the state capitol were filled with CSBA members, some in formal suits some in cowboy hats and bolo ties, on their way to meetings with state senators and assembly members. In those meetings, school board members stressed the repeal of the reserve cap, which would limit districts’ ability to save and undermine local control, and other key public education policy issues. With participants encouraged to provide local examples, the list of issues discussed included:

As Merced City School District board member Susan Walsh said in a meeting between ten members from Central Valley districts and State Sen. Anthony Canella’s office, “Education is the rising tide that lifts all boats.”