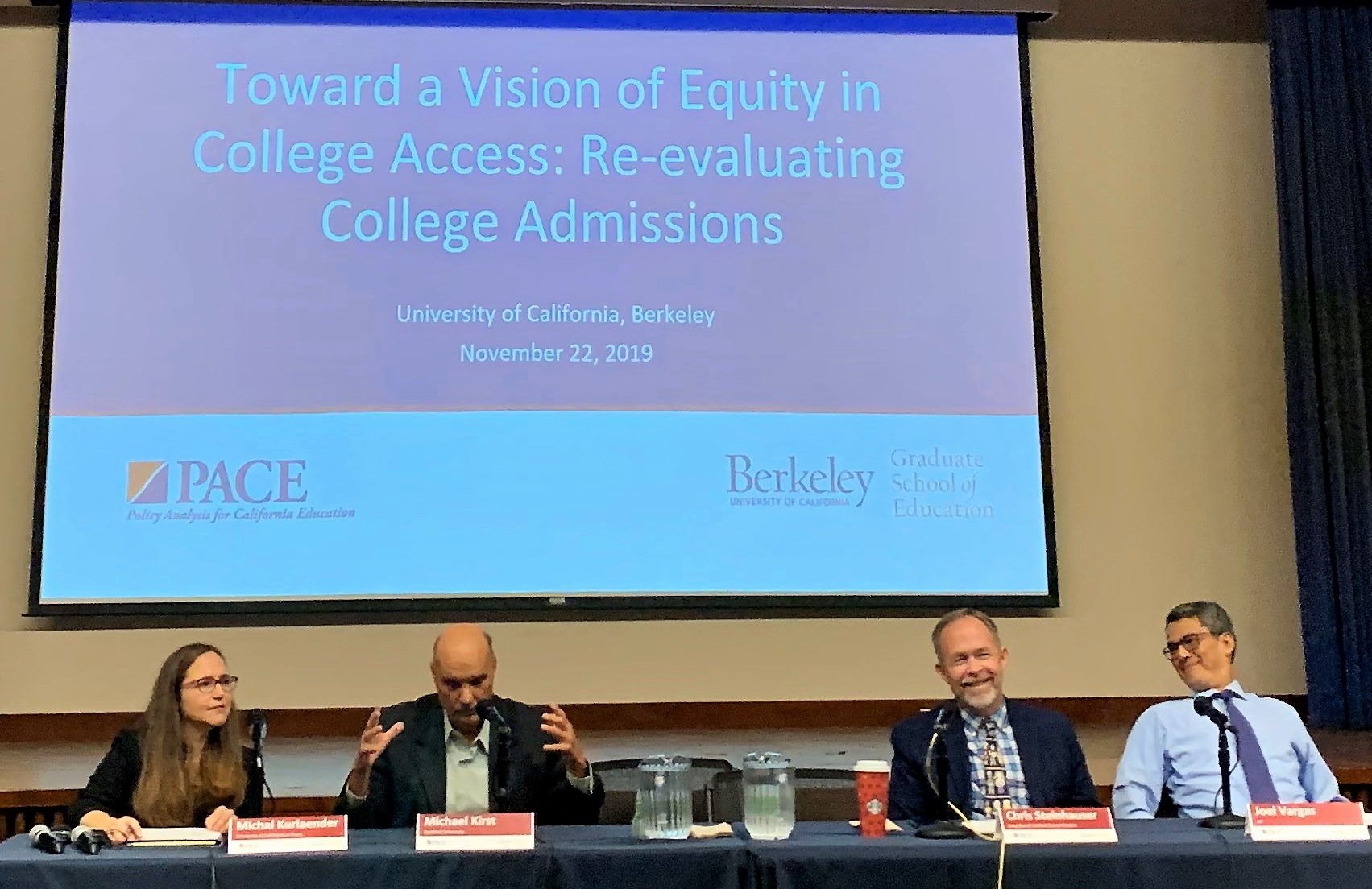 The convergence of new research on standardized testing, a controversial proposed entrance requirement at California State University and the recent “Varsity Blues” admission scandal served as the backdrop for a wide-ranging Nov. 22 forum at UC Berkeley Law School.

The Policy Analysis for California Education event, “Toward a Vision of Equity in College Access: Re-evaluating College Admissions,” saw its biggest news when UC Berkeley Chancellor Carol Christ announced she is in favor of ending the admissions requirement that applicants take the SAT or the ACT. “They really contribute to the inequities of our system,” she said.

Christ cited growing concerns over discrimination and equity with the norm-referenced tests — ones that serve to rank students in relation to others — such as a paper from UC Berkeley Center for Studies in Higher Education senior associate Saul Geiser. Geiser presented on his work at the PACE event, which concludes that “tests have become more of a barrier to admission of disadvantaged students.”

More than 1,000 colleges and universities across the country are now test-optional for admissions, as both GPA and coursework have been shown to be more predictive of college success, State Board of Education President Linda-Darling Hammond said in her opening remarks. “The field is at an inflection point overall in the nation, as it is in California,” she said.

Michael Brown, UC provost and executive vice president for academic affairs, also criticized the SAT and ACT for exacerbating inequities. While admitting UC and CSU must address these testing concerns, other admissions requirements and a lack of available spots, he said the education system’s inequities run much deeper than a matter of who receives an acceptance letter in their senior year of high school.

“More than we ration access to higher ed, we ration preparation for higher ed,” Brown said. He pointed out that roughly 60 percent of UC system applicants come from 20 percent of the state’s high schools.

A stronger connection would enable more students to more smoothly transition from high school to a successful college experience, panelists said, rather than officials merely being satisfied with a student’s admission to a higher education institution. “Enrollment alone will not solve educational disparities,” said Christ, noting that familiar support systems available in K–12 often fall away when a student steps onto a college campus.

Lupita Cortez Alcala, chief deputy superintendent of public instruction, explained how the California Department of Education’s role has dramatically changed over the past several decades. Now, she said, officials must work harder to acknowledge inequities and to position all students for college and career success. “There is a recognition that we need to do more in K–12 to equalize (inequities),” she said. “Our role is not just to graduate students; it might have been at one point.”

“A high school diploma is not enough,” agreed Joel Vargas, vice president of the national workforce and education nonprofit JFF. He cited projections that, by 2025, California may face a shortage of 1.5 million workers with “some college” experience — larger than the projected one-million-worker shortage of college graduates.

While he believes the state’s K-12 and higher ed systems lack coherence, former State Board of Education President Michael Kirst said the presence of A–G Standards, the adoption of Common Core standards and the inclusion of the College/Career Indicator on the California School Dashboard have made significant inroads. “These students now are getting much clearer signals,” Kirst said.

A newly published PACE report coinciding with the UC Berkeley event confirms some of that observed progress. Strengthening the Road to College: California’s College Readiness Standards and Lessons from District Leaders finds that, “As a whole, these efforts represent significant investments to better align California’s K–12 and postsecondary systems of education and to address persistent disparities in educational attainment by race and socioeconomic status.”

But the report’s analysis of Dashboard data finds that just 42.2 percent of high school graduates in the 2017–18 statewide cohort were deemed prepared by completing at least one pathway of the College/Career Indicator and an additional 17.1 percent were deemed approaching prepared.