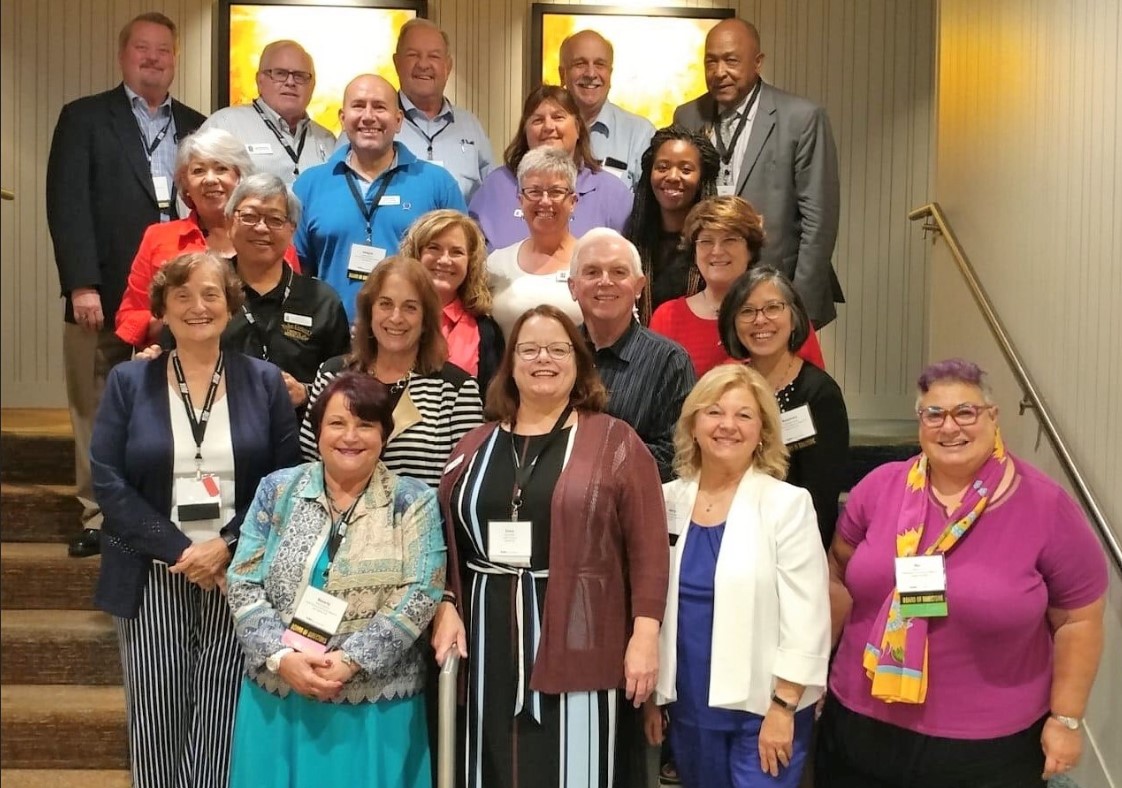 California County Boards of Education continued to support its members with timely information and trainings in the past year, while also enhancing the voices of county offices in Sacramento and strengthening relationships with CSBA. CCBE President Dana Dean, a trustee for the Solano County Office of Education, lifted up these accomplishments during her report to the membership at the CCBE’s 2019 Annual Conference from Sept. 13–15 in Monterey.

The increased advocacy efforts were on full display with this session’s charter school legislation, a topic addressed throughout the gathering, particularly with the compromise on Assembly Bill 1505 (O’Donnell, D-Long Beach). Earlier versions of AB 1505 would have significantly limited the authority of county boards over charter schools, Dean said.

Dean reported that CCBE, with four county representatives on CSBA’s Legislative Committee, advocated through both associations at the Capitol to maintain a county office’s authority to review a charter school’s appeal of a district-denied petition, as well as other protections. “The super, super majority said we want to fight for this, and that’s what we did,” Dean said of the CCBE membership.

Final bill language sent to Gov. Gavin Newsom, however, introduces an important new facet to the petition and appeal process. County boards will now not have to only consider a charter’s appeal on traditional grounds but also on the financial impact the school will have on a district, Capitol Advisors Group president and partner Kevin Gordon told conference attendees.

In other words, county boards will be facing an added standard to ensure that they are, in the appeal process, looking out for the solvency of the district that denied a charter school’s petition. “The (county) board could be doing something that ends up getting the district in more trouble,” Gordon said. “You guys are going to have a lot of pressure on you; that’s for sure.”

Further, because the State Board of Education will now only hear appeals when the district or county abused its discretion, Gordon said he foresees interest groups spending lots of money on county board races in the future. “The political pressure is going to be nasty,” he said.

The need for more funding

Gordon also spoke to the fact that although California continues to see very healthy general fund revenues outpacing projections, the state is “way overdue” for a recession that will undoubtedly impact its underfunded K-12 education system. He cited CSBA’s campaign to place a Full and Fair Funding measure on the ballot in 2020 as a strong and sound effort to bolster base education funding. Unlike the proposed split roll measure for Prop 13, all the money from CSBA’s ballot measure would go toward public education, he said.

During her president’s report, Dean encouraged all of the nearly 200 county board members in attendance to make sure their county offices of education have passed a resolution supporting Full and Fair Funding (a sample resolution is available at www.fullandfairfunding.org).

“We must dramatically increase our investment in public education,” CSBA President-elect Xilonin Cruz-Gonzalez told the crowd in her address.

Additional highlights of this year’s conference included presentations on addressing and communicating issues connected to pension plans and the rising costs of employer contributions; how county boards can close the opportunity gap through investments in early education; and a closing general session panel discussing disaster preparedness and recovery.

Mike Walsh, CSBA Immediate Past President and Butte County Office of Education trustee, shared first-person insights into how his county office dealt with the deadly Camp Fire and what lessons officials learned. Walsh said the key takeaway for county board members is the importance of doing what one can to help those in need, while letting the experts do their jobs. “Our role didn’t change in that fire. It simply become how do we support and how do we advocate.”

During and after a crisis, Sonoma County Superintendent of Schools Steve Herrington said board members can act as the eyes and ears in their communities and report back to the county office about what is needed. Herrington also spoke to the imperative need of having as many counselors for students and staff available as possible. He said Sonoma County districts are addressing ongoing trauma two school years after the fall 2017 fires that ravaged Santa Rosa and several surrounding areas.

Walsh and Herrington also stressed the importance of having the proper personnel, documents and equipment in place before an emergency arises, ranging from a chief safety officer to battery operated radios to mutual aid agreements and mitigation plans.